Kate Upton in Latrobe! When a supermodel comes to town 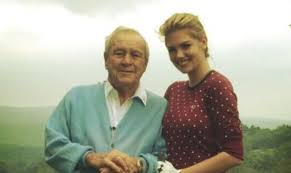 (715 words)
It was early morning last Thursday and I’d already said “Hey!” to three familiars at the local convenience mart before I’d even peeled my breakfast banana.

It promised to be a real heyday.

And so it was. Everywhere I went I saw someone I knew. I saw plumbers, postal workers, realtors, bankers, librarians, radio announcers, bread truck delivery drivers and four or five local bartenders.

They were uniformly smiling and friendly.

That’s why I feel ashamed to admit I’d have chucked them all for a little face time with Kate Upton.

I found out later that day she was in Latrobe for a golf lesson with Arnold Palmer.

I guess she must already know how to blog.

Upton, 21, is the Sports Illustrated swimsuit issue cover model for two consecutive years. She is a consensus choice as one of the world’s most beautiful women.

So I’m chagrined I didn’t get a good long gawk at the babe.

The strange thing is I really don’t know why.

I guess I just wanted to see the elephant.

That’s an expression you don’t hear too much anymore. At one time in rural 19th century America the term “see the elephant” meant packing up the family and driving the wagon great distances to attend a traveling circus that featured an authentic pachyderm.

Anyone who’d seen the elephant would have a certain worldliness bestowed upon them.

I guess that’s what I’d have done if I’d have known Upton was drinking in the Marriott SpringHill Suites Thursday night, as she was indeed. One of my friends at the bar accused me of knowing and selfishly keeping the news to myself.

But would I have kept the news to myself? Probably.

Let’s examine for a moment what might have happened had I been tipped off that one of the world’s most desirable women was just down the street.

First of all, I would have flossed and brushed my teeth. You can’t make a good impression with a chunk of chicken lodged between the upper right lateral and cuspid teeth.

I’d have stripped off my “Denny’s Beer Barrel Pub” t-shirt promoting the world’s biggest hamburger, opting instead for a snazzy Tommy Bahama. I love Denny’s, but she doesn’t have the figure of a woman who looks like she’d be interested in hearing about the time I attempted to eat a 96-ounce meat monster.

Let’s assume, too, it’s later at night and she’s still at the bar. She’s alone.

Maybe I would have sat one discreet stool away from her. It’s likely I’d know the bartender there so I’d receive a warm greeting that would signal to her I’m cool.

I’d say, “Hello, I’m Chris. And I know who you are. You’re one of the world’s most beautiful women. You’re in Latrobe to get a golf lesson from Arnold Palmer. He’s a friend of mine. In fact, he provided the gushy cover endorsement for my book, ‘Use All The Crayons! The Colorful Guide to Simple Human Happiness.’”

Maybe she’d ask if I had a copy in my car.

Maybe I’d tell her I just happened to have one right here in this gift-wrapped package with “To Kate” written on the tag.

Maybe she’d excitedly open it, read the inscription, blush, and wonder just how on earth I knew her favorite color was orange.

Maybe we’d have a few drinks and maybe she’d invite me to come up to her room to read her some of my book aloud.

Who knows? Maybe that’s exactly what would have happened.

More likely this would have:

I’d have walked into the lobby and seen her sitting there looking lovely and said to myself, “Yep, that’s Kate Upton, all right.”

For me, just seeing the elephant would have been enough.

It’d be unrealistic to think I’d ever be one of those guys who gets to climb on up and take a ride on the thing.