Hollywood hoo-hah: "The Butler" & me 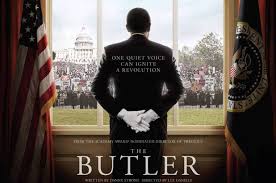 Here’s how skeptical I am over the historical accuracy of “The Butler:” I’m no longer sure the actual butler was black.

Being a black butler is a key part of Eugene Allen’s compelling story. Allen died in 2010 at the age of 90.

Born on a Virginia plantation in 1919, he ended up serving as butler for eight U.S. presidents from Truman through Reagan over the 34 years that encompass the tumult of the Civil Rights era.

The movie stars Forest Whitaker as Allen. He’s great, as is Oprah Winfrey, although every time I saw Oprah on screen my first thought was always, “Well, there’s Oprah again trying to act like she’s someone who isn’t Oprah.”

I took Josie, our soon-to-be 13 year old, to see it Saturday. She indulges my reverence for history and unlike many children her age will see movies with her father that have nothing to do with talking airplanes, boy bands or animated superheroes.

So I wanted her to see “The Butler” because it was about inspirational men and women who are to me actual superheroes.

I contend the American freedom riders who were at the forefront of the Civil Rights movement were every bit as heroic as the men who stormed the beaches at Normandy.

The men at Normandy were armed and encouraged to fight back.

I won’t spoil what happens on film for you because it is entertaining. Josie liked it, and I was pleased that she got a real sense of some of the Civil Rights struggles.

I liked it, too. At least I did until I made the mistake of sleuthing around for the truth about the butler. Turns out “The Butler” and the butler could be different people with the same name.

I felt the same way about last year’s “Argo” when I learned that otherwise outstanding “based on a true story” movie tricked up the ending.

I wondered what the real butler would have said had he known movie producers would distort so many basic elements of his life. At first, I thought this apparently proud man would have been appalled.

Then I thought about it a little more.

Maybe he’d have been flattered.

After all, 72 percent of www.RottenTomatoes.com critics like “The Butler” and the movie’s earned $100 million. It’ll likely take some bows at Oscar time.

With that in mind, I’d like to make some basic plot suggestions for whenever Hollywood gets around to filming “The Honest-to-Goodness True Story of Chris Rodell,” which might happen about the time they realize the 32nd sequel means the X-Men franchise is running out of steam.

First of all, I’d like to be an orphan. I love my parents, but burying one and caring for the other while she’s in her dipsy decline is no fun. I’d rather Mom and Dad not be part of my story.

Dittio plot-cluttering siblings, too. Remember, this was done in “Happy Days” with Richie and Joanie Cunningham’s older brother, Chuck. He made some token appearances in the first season and then just simply vanished, a confounding disappearance that bothered no one even a little bit.

My family today is an essential part of my story and I’d like to keep them intact with some key adjustments.

First I’d want one of my daughters to be a piano prodigy. They both labored at piano lessons -- did quite well, in fact -- but they took no joy from their efforts. So I’d like one of them to fall in love with playing the piano.

The other I’d like to fall in love with doing yard work.

And for commercial reasons regarding appealing to that demographic, I’d like one of them to be Asian.

I think my story would be enlivened, too, if I had a bunch of pretty stunt wives.

These gorgeous women would not take the place of my own darling wife and they wouldn’t be able to make tactful suggestions about how I should be spending my time, as my own wife is wont to do. Stunt wives would be there to do the things my own wife refuses to do when she believes I’m becoming redundant.

And I think the story would be better, too, if I did a lot of flying.

Not in an airplane, either.

You may think these stupid ideas would fundamentally alter the story of my life.

Well, maybe, but so what?

It’s bound to sound cliche, but “The Butler” did it.

I'm Tony Ehlinger's nephew and he referred me to your blog becuase I write movie reviews at www.lifeisinthemovies.blogspot.com and just reviewed The Butler the other day. This is really well written and I agree with a lot of what you have concerning the movie itself. Whitaker is great and will probably get an Oscar nom but the movie did lack some appeal here and there. Well done!

Andrew Leachko said...
This comment has been removed by a blog administrator.
September 16, 2013 at 7:35 PM

Hey, thanks, Andrew! Great to hear from you. And thanks for the compliment on the blog. I checked out your review and agree. It's a very well-written review, my friend. Lots of other good stuff there, too.

I appreciate your enthusiasm and passion. Keep it up!

And tell Uncle Tony I said hello. He's the best! I miss seeing him.