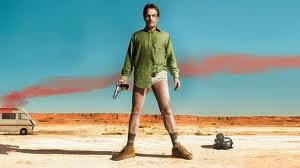 (310 words)
Lots of “Breaking Bad” finale chatter. Here’s my take: Walter returns to New Mexico where half his face gets blown off by Charlie Rose who then shaves his head and assumes Heisenberg’s identity.

That’s no nuttier than some of the other theories I’ve heard.

And that’s great. Story possibilities are limitless. Does Walter survive? Do he and Jesse team up? Will Todd and Lydia consummate their one-sided infatuation? Will those murderous neo-Nazis conclude they’ve made some bad life choices and volunteer to pass out fliers on behalf of the Albuquerque Rainbow Coalition?

It’s all on the table.

Vince Gilligan ought to send David Chase a case of champagne and a dozen roses in heartfelt gratitude for the forever flawed way Chase ended “The Sopranos” in 2007.

All “Breaking Bad” has to do is film an actual ending. That’s it. For a show that has reached so many dramatic heights, the finale bar is set pathetically low.

“Soprano” supporters say the ending was enigmatic and deep.

Why a show that had so many cops in it chose to cop out at the end is a question Chase has never really answered.

The “Breaking Bad” cast, crew and creator have spent the summer swaggering through publicity stops with a justifiable swagger. This concluding run has been outstanding and cast members keep referring to the ending as “perfect” and “satisfying.”

I’m tingling in anticipation of what they’ve cooked up -- and I’m talking more than just another batch of blue meth.

So, fans, enjoy the show. Val and I can’t wait.

Here are the links to the “Breaking Bad” stories I’ve written since we fell under Walter White’s sway just two years ago.

Reunited: TV and me!