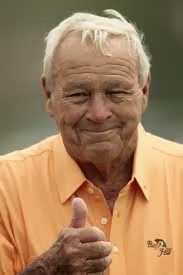 (1,059 words)
Accomplished athletes who’ve performed at the highest levels may disagree about which sport is the more difficult, but few dissent on this point:

One of the most challenging things to do in any sport is to hit a golf ball with anyone watching.

It’s because golf is the most self-humiliating game there’s ever been. The golf ball is stationary. It doesn’t trash talk. Pretty girls have dimples. So do golf balls.

For something that doesn’t ingest PEDs, the golf ball is incredibly difficult to hit.

Like that biological imperative adolescent boys surrender to with other kinds of balls, golf provides simultaneous shame and satisfaction.

Really, it’s something that ought to be done all alone and in the dark.

So all that means a shot I hit on Wednesday was one of the greatest shots in golf history. Mine, at least.

I stiffed a 125-yard pitching wedge to four feet of the pin with nine people watching.

And one of them was Arnold Palmer.

Now at this point I feel I must issue an apology to the 97 percent of the readers who reflexively roll their eyes when I launch into yet another Arnold Palmer story, something I do on a near monthly basis.

They think it’s shameful name-dropping at its worst. And who am I to argue?

But I believe about three percent of readers are aware of my Palmer connections and check in each and every day for the sole reason that I might mention even a glancing encounter with the man they know as The King. These 3 percenters are disappointed when I don’t include at least one Palmer mention in each post.

They say, for instance, “Well, I thought his musings about ants on gum enjoyed a puckish discretion with lyrical delivery, but I don’t see why he couldn’t include a Palmer mention in that one. I mean, Palmer’s seen ants, too, hasn’t he?”

So I’m going to try and keep this short.

So there he was sitting with his wife in a golf cart on the roadside tee of the 125-yard second hole at Latrobe Country Club last Wednesday. It’s a pressure-packed shot to begin with because it’s a “beat-the-pro” hole in which you wager you can beat either one of the club’s talented assistants.

I’d been invited to play at the club’s monthly stag event.

This happens a lot.

That’s because bona fide members know I’m near and always available for golf and giggles. So if there’s a last minute cancellation, they say, “Someone bailed and we need a warm body. Let’s call Rodell.”

Note: No one’s ever once said, “We need to win. Let’s call Rodell.”

I’m a terrible golfer. I’ve been playing for 40 years and for the last five or six years it’s been a struggle to break 100.

This is not uncommon. In fact, it’s typical. The average golfer never breaks 100.

But I don’t consider myself average.

I used to be decent. Just 10 years ago I shot an 84 at Pete Dye’s challenging Carmel Valley Ranch on the Monterrey Peninsula.

Plus, there’s all that golf writing I’ve done. I spent many years contributing features and essays to the nation’s top golf magazines. People assume, gee, I must be really good. In fact, there’s no correlation.

But I feel tremendous self-imposed pressure to be good. That’s what I was thinking when we began to banter with Palmer and his wife, Kit.

Banter? That I’ve got down. I asked if he had any advice on how to ace the second, a good question given that he’s aced it four times, something I was quick to remind him

This would be off-putting if it were anyone else. Golfers lucky enough to have had aces remember the events with the same clarity as they do the births of their children.

I’ve never had a hole-in-one, but I remember the four times I’ve come within inches.

I guess he can be forgiven for not remembering his own ace trivia because he’s had 21 of them. There’s a link below to an interesting story I wrote about them. One fact: 8 of the 15 aces occurred in September with five of those being struck between Sept. 3 through 7.

Of course, none of this was going through my head as my turn to swing arrived.

He’s observed me golf before and when he did my only swing thought was, “Just don’t crap your pants.”

Maybe I’m improving because I remember thinking, “Ace here in front of Arnold Palmer and it’ll be maybe the coolest thing that’s ever happened to you.”

I began to draw the club back.

Then right at the crucial moment -- “Honk! Honk! Honk!”

Some jackass thought it would be cute if he or she could disrupt my swing. The nerve.

Yet I was unfazed. I struck the ball crisply and sent it sailing on a high arc right toward the flag.

He was correct. Missed the pin by about six inches and settled two feet past the pin (and, yeah, I sunk the putt).

“Nicely done!” said Palmer with a thumb’s up. “And with that horn honking in your backswing. Great concentration!”

I got creamed by my partners, but at the end of the round all we talked about was what it was like to hit a shot with Palmer watching, and how I did the best.

I raced home later to tell Val all about it.

Before I could get started, she interrupted, “Hey, we saw you out golfing! We were pulling out of school and  Josie said, ‘There’s Daddy! Honk the horn!’ Did you hear us?”

I’m not saying I’d have left my wife and kids -- well, Josie, at least -- if their honking had destroyed my concentration and caused me to dribble an embarrassing shot in front of the great Arnold Palmer.

But I will say this:

Had that ball gone in with all those challenging elements, well, I’d today be as happy as ants on gum.

The joys of ants on gum

The story of Arnold Palmer’s aces

Kate Upton in Latrobe! When a supermodel comes to town
Posted by Chris Rodell at 12:58 PM