Why'd they cancel the baseball game? 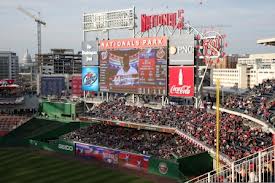 (493 words)
Another mass slaying; another round of questions.

Thoughtful observers are again asking what we can do to prevent more killings. Who’s to blame? Where any loopholes evaded?

Me, I have just one question:

Why did they bother canceling the baseball game?

The Washington Nationals were scheduled Monday to play the Atlanta Braves in National Park one mile from the kill site. The Nationals are in the thick of the National League wild card race.

With a record of 9-1 the last ten games, the Nationals have been murdering their opponents, metaphorically speaking, of course.

My morning paper described the spree as “horrific,” hinting, I guess, I should be horrified.

It takes a hell of lot more than 13 dead to horrify most of us anymore.

To me, being horrified implies we’d all be saying, “My God. This is truly horrific. This is something none of us could ever conceive happening right here in America, in the nation’s capital for God’s sake! For the love of all that’s holy, let this be the impetus for sensible action. Surely, we must act now. Because if we don’t, this kind of thing could -- God forbid --happen again. And next time it might happen right inside one of our schools!”

In the realm of spree killers, it takes a lot more than 13 dead adults to horrify those of us who pay attention to the news.

I wonder what the over/under is anymore to get a spree killing on the front page. Is it five? Four? Kill just three and, guaranteed, your story will get buried back behind the Colorado floods and California wildfires.

Horrified? I’m no longer even numb.

Unless the bullets are flying at you or ones you love, what’s the point of caring?

As you’ll see in the Bob Costas link below, I’ve offered gun violence solutions that run the gamut from no one having guns to everyone having guns. I’ve suggested all public places have wall-mounted armories of loaded weapons right beside the fire extinguishers: “IN EVENT OF SPREE KILLER, BREAK GLASS.”

I’ve said I’d even be happy turning over the enforcement of the 2nd Amendment to the NRA and let them see if they could reduce gun violence.

I’m just fed up waiting for someone to try something.

Because it’s a safe bet canceling last night’s baseball game will be the only concrete action to result from the Navy Yard slaughter.

And the body count will continue to rise.

Sadly, I thought exactly the same thing. I'm/We're immune to tragedy of this nature because it is a constant.

That's the real shame, Holly. We just scan the victim totals and wait with dread for the next one.