Buddy Holly & The Crickets! But not the cicadas 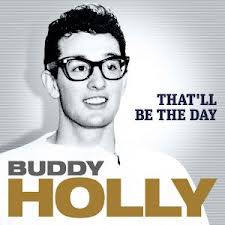 (782 words)
I was upstairs with a mouthful of bedtime toothpaste when my wife shrieked there was a huge cricket in the basement.

I finished brushing, spit, looked up in the mirror and thought, man, this will be really cool if that huge cricket turns out to be Buddy Holly.

The Texan was said to be in a plane that went down in Clear Lake, Iowa, farmland February 3, 1959, the day Don McLean says the music died.

I tingled with anticipation as I descended the stairs. You can argue he wasn’t really a Cricket, that being the name of his band, but that’s nitpicky. I’ll bet his bandmates considered him the biggest Cricket of all.

I thought if Buddy Holly is right now in my basement I will in 24 hours be famous around the world.

That’ll be the day.

It wasn’t Buddy. It was just your average cricket.

And I in no way say that to disparage your average cricket, an insect with surprising reservoirs of meteorological intelligence. Did you know chirping crickets are capable of conveying the outside Fahrenheit temperature?

It’s true. Count the number of chirps they make in one minute, divide by 4 and then add the number 40 to reach the temp.

Or you could just once tap the weather app on your smart phone.

Being a pacifist, I, of course, didn’t squash it. I instead gently cocooned it in a Kleenex, took it outside and set it free. It thanked me by serenading me to sleep with one of summer’s sweetest sounds.

I adore crickets almost as much as butterflies.

I tend to judge insects on the sounds they make and the chances that one of the nastier little bastards is going to sting me. So I hate buzzing bees, wasps and hornets. Spiders are just sneaky. Why God didn’t think to have them come with tiny sirens is a mystery.

I’ve spent a good deal of this summer thinking of insects mostly because I was eagerly anticipating the promised emergence of the 17-year Brood II cicadas.

What the hell happened to them?

We were told this year we in western Pennsylvania and throughout much of the East Coast would be inundated with them.

How can something that emerges like clockwork every 17 years just not show up? Could it be climate change? Fracking?

I prefer to think they’d heard all the buzz about “Breaking Bad” and decided to stay underground until they could catch up on NetFlix.

It’s a huge disappointment. I was so looking forward to the cicadas. I feel like I’ve been stood up on a date with a beautiful woman.

Or more like a couple billion really ugly ones, and when you put it into those numbers quantity versus quality becomes a real factor.

Fall of 1981 was the last time I laid eyes on a cicada. The last time, too, I had one fly into my mouth and up my nose.

I was a freshman at Ohio University when the brood took over campus to engage in their 17-year mating cycle, ironic because that was just about precisely what my batting average was in those days.

What was funny was it looked like those odds were about to change. I started off dating a pretty junior and was hoping this more experienced older woman would soon bestow the sort of education not mentioned in any of the stuffy class syllabi.

It was not to be.

There was this one tall, skinny poplar tree outside our dorm. Me and my buddy figured we could climb way up near the top, give the branches a good shake and unleash the kind of plague not seen since God and Moses began punking the Pharaoh.

And that’s exactly what happened. Cicadas filled the air. Some flew into the dorms,  some into the classrooms, some into open car windows

I’m convinced one particularly adventurous one found it’s way into an intimate region of that girl I so desired.

Because as I gazed down through that magnificent swarm of insects, I could discern the faint outline of that very girl glaring up at me with a look of scornful contempt.

It was the look of a woman who had a real bug up her ass, and it occurred to me that was maybe the first time in history when that phrase was put to non-metaphorical use.

I saw her a few days later and she told me to buzz off.

Didn’t bug me a bit.

If biological patterns about the timed emergence of that particular cicada held true, she wasn’t going to be any real fun until the year 1998.

Email ThisBlogThis!Share to TwitterShare to FacebookShare to Pinterest
Labels: 17 year cicadas, Breaking Bad on Netflix, Buddy Holly and the Crickets, can crickets predict weather, Ohio University no. 1 party school, What happened to the 2013 cicadas, woman with bug up her ass