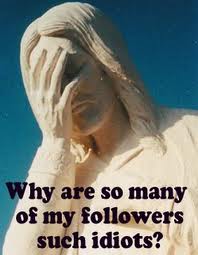 God heard two prayers this week from two devout young men beseeching Him for freedom from what each believed was unjust incarceration.
One was 22-year-old Allah Mohammed Agha, an inmate in a Kandahar prison.
The other is Matthew Elrod, also 22, who’s been praying weekly that God helps him escape Redemption Island, a faux place of penal isolation, on the CBS reality game show, “Survivor.”
God granted only one of their prayers.
Yes, the Almighty, it seems, opted only to answer the prayer of an imprisoned Taliban soldier. Agha was one of nearly 500 Taliban who crawled to freedom in the outrageous tunnel escape.
“I’d been praying to God that He would free me,” Agha later told reporters. “And tonight He answered my prayers.”
And He continues to ignore my fervent prayer that He cease listening to prayers from devout young idiots.
Elrod studies pre-med at David Lipscomb University, a fundamentalist Church of Christ college in Nashville.
In show after show, he’s been featured praying the way the Bible says Job did after God laid waste to his every reason for being.
“I don’t know why, Lord, you’ve chosen me to suffer this humiliation,” Elrod’s said. “But if this is the burden you’ve chosen for me, then I shall endure it. I will do your will, no matter the hardships.”
The crucified Christ did less whining.
It’ll once again tonight have me leaping out of my chair to scream at the television, “You’re on a #&$!%* game show! Leave God the #&$!%* out of it!”
I’ll never understand the vanity of praying to a God in the belief that He’s immersed in the petty details of soft lives when He’s apparently indifferent to the prayers of those beseeching Him for justice in a world that too often seems truly godforsaken.
What? Is His prayer spam detector broken?
Want to know what I pray for?
I pray for the sick, the lonely and the sad. I do it every night down on my knees with my daughters.
It’s fun praying with little girls. They ask God for things like help in getting the stupid dog to quit whizzing on the carpet.
Just the other night, the 4 year old came up with a classic mingling of the secular and the sacred when she concluded her Easter eve prayer with “. . . and God bless the Easter Bunny and God bless yourself.”
I do on rare occasion pray for myself to be a better father, a better son, a better husband and, yeah, the essence of those prayers revolve around more success and more (some!) money.
In this way, my selfish prayers are not unlike the fictional rail bird the legendary New York Times sports columnist Red Smith once conjured. I remember it so well from Ira Berkow’s outstanding 1986 biography of Smith.
The bettor, Smith wrote, beseeched God to help his horse break the gate strong and, please, God, let the jockey be wise in going to the whip. Lord, I beg thee, he said, help the pony sense he’ll need strength at the final post. He prayerfully coaxed the horse around the entire track into a commanding stretch lead.
That’s when the bettor said, “Thank thee, oh, Lord, I’ll take it from here . . . Go, you son of a bitch! Go!”
I wonder if all our pitiful little lives aren’t really just part of some reality game show God enjoys watching the way I enjoy “Survivor.”
I’m fascinated by the interactions and the treachery, but no matter what they say or what I wish, there’s absolutely nothing I can do to change any of the outcomes.
I just sit there and watch the show.
Posted by Chris Rodell at 1:59 PM