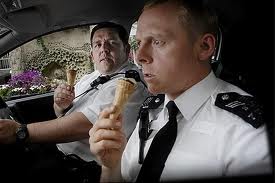 Out of petty protest, I once again will not be attending the Pittsburgh Pirate home opener today. I won’t further enrich owner Bob Nutting who reaps enormous profits and never does anything to improve the once-proud franchise team.
But that doesn’t mean I can’t exercise my inalienable right to play hookie.
Happily, The Pond, the Latrobe tavern that rents me the shabby second-floor penthouse, understands this. Dave and Jill bring in a popcorn machine, offer deals on hot dogs and get a nice friendly crowd of inebriates to enjoy watching the festivities.
If Nutting could hear us booing him it would be just like being there.
So that makes it a good day to fire off a round of observations and sprinkle in some recent tweets before I take myself out to the ol’ ballgame.
• We’ve seen a bunch of movies, old an new, lately. Just saw “Paul” with Simon Pegg and Nick Frost and Seth Rogan as an errant alien. Pegg and Frost are the Brits behind two of my favorite movies of all time, “Shaun of the Dead,” and “Hot Fuzz.” Just hilarious. It was very good, but not in the league of their best, both of which score in the upper 90 percents with reliable critic compiler, www.rottentomatoes.com. “Paul” is scoring a still-respectable 74 percent, which is about what I’d give it. Still, it was a hoot and I recommend it.
• In a confounding deal they signed when he was over-the-hill in 2000, The New York Mets are obligated to pay former Met (and Pirate) Bobby Bonilla $1.2 million every July 1 through 2035. He was a fine Pirate -- I guess in at least one way he still is -- back in the early 1990s. I remember the Pirates in ’91 offered him $25 million, a then jaw-dropping sum. Bonilla declined and said he had to “take care of his family.” The line prompted this memorable outburst from manager Jim Leyland, “Heck, for $25 million you could take care of Guam.”
• Just saw reports that a Knoxville air traffic controller is extending the snoozing pilot tracker scandal after getting busted napping in the tower for five hours. I don’t sleep five hours in my own bed. Maybe I should apply for his job.
• While “Paul” was enjoyable, “Hop” must be avoided at all costs. We have two young ‘uns and enjoy supporting the local family-owned theater so we make an exception and will see what we’re certain will be crap there. We were right. It’s awful. Yet, it was made by the people who made “Despicable Me” and included many talented people. At some point, somebody had to realize that they were filming a charmless stinker. This will surprise critics of this blog, but I pull the plug on some topics when I think it’s not worthy of my feisty band of reliable readers. Does my blog have more integrity than Hollywood? Apparently.
• Last week I played the world’s worst April Fool’s Day joke on my daughter, 10. Told her I was offered a prestigious full-time job that would require relocation. She thought it preposterous.
• Oprah’s ending her show on May 25, four days after Christian group declares scripture says the world is going to end. Coincidence or just more evidence of Oprah’s business savvy?
• If grandma truly has a heart of gold, you might want to re-think that organ donation. It’s worth about $14,860.
• Americans should be required by law to watch at least one Alfred Hitchcock movie every six months. We just enjoyed “Strangers on a Train.” Wonderful. I guess my favorite Hitchcocks are “Dial M for Murder” and “Rear Window.”
• HBO cast Ed Harris to play Cheney in the mini-series. It could be fatal to Harris: Only Cheney can play Cheney. The role will kill lesser mortals, not to mention many innocent bystanders.
• Boutique urban lodging places that were once brothels and are now trendy spots for business travelers to stay should be called ho’ tels.
• I’m embarrassed by my ignorance of Libyan geography, but will rebels need to go through Singoli and Douboli before getting to Tripoli?
• Josie, 10, is getting old enough to watch some of the great PG movies that we hope will show her there’s more to entertainment than iCarly and “High School Musical.” It’s working. We recently let her to stay up late to watch two of our very favorites, “Sneakers,” and the rarely remembered Stephen Spielberg/Leo DiCaprio film, “Catch Me if You Can.” “Sneakers” is a cerebral 1992 Robert Redford caper flick with an outstanding ensemble cast that includes Sidney Poitier, Dan Ackroyd and the late River Phoenix. “Catch Me If You Can” from 2002 is the true story about impostor con man Frank Abignale. Josie loved ‘em both. She may be lax about cleaning her room, but that kid’s going to have good taste.
• I’ll try and post a reminder, but I have a funny story due to run tomorrow on MSNBC.com. It’s about Lake Jackson, Texas, the most confusing town in America. It has streets named This Way, That Way, Any Way, Which Way, Circle Way, Center Way, etc. The city manager told me it’s not uncommon to give directions that include “Go three blocks on This Way, then make a left on That Way and bare right on Any Way.” When the confused motorist inevitably asks, “Which Way?” they have to say, no, that would be the wrong way.
• As previously, mentioned the aggregate totals on www.rottentomatoes.com are a reliable gauge about a movie’s worth. That’s why I felt immense relief when I checked to see that critics are thinking about the Russell Brand re-make of “Arthur,” another favorite of mine. It is currently tracking at 8 percent. Japan is dealing with a nuclear nightmare and news of another earthquake. Still, if they offered to take Russell Brand off our hands in exchange for their woes, I’d consider the swap.
• More random tweets can be found @8days2amish.
Go Bucs!
Posted by Chris Rodell at 12:50 PM

I recently introduced my 11 year old son to the joys of Hitchcock movies. "Strangers on a Train" was the first one we watched and one of my favorites. His favorite so far is "The Birds" but that's only because I still won't let him watch Psycho. We also have started watching what he calls old Action flicks--Terminator (with my finger on the FFWD button at all times) etc...I draw the line at Rambo though. :)

Yes, Tia, good choices. Ours loved "Rear Window." There are so many great ones I think should appeal to all ages. We're hoping to record "Close Encounters" one of these days. I can't wait for her to be able to see the full profanity movies that are so funny. I'd probably put in bad daddy jail if I show her "Slapshot!" before she's 17, though.