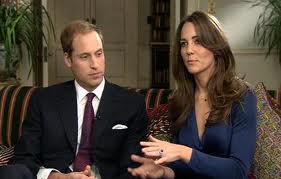 The best marital advice I was ever given is the one I’ve most ignored:
“Always argue naked.”
I only wish I could convey this sentiment to Will and Kate.
Like any married couple, they are bound to fight and thoughts more martial than marital are impossible when one is nude.
Alas, I’ve never once begun a nasty joust with my wife by suggesting we both remove all our armor. We’re both too businesslike for that. If we’re fighting, the last thing on our minds is getting naked and if we’re naked we certainly aren’t thinking about fighting.
It’s the way we’re wired.
It’s too bad. Clearly, we’ve surrendered to conventional thinking.
I think our fights would end instantly if at the first harsh words, we’d lock eyes and start undressing each other.
Instead we both sort of sulk. We approach a sort of marital demilitarized zone, reconnoiter the fortifications and back off like they’ve done at the 38th parallel between North and South Korea since 1953.
I think this is fairly common behavior for married couples who fight without resorting to an exchange of gunfire.
I wonder how Will and Kate will resolve their differences.
Kate seems like a shopper so she’ll probably cool off by going with her friends for what I’ve heard called retail therapy. It’s a perfectly harmless way for a princess to blow off steam, especially when British taxpayers seem so at ease with funding the silliness that goes along with hosting a royal family on the national teet.
Will’s another matter. Sure, he could dash off to a distant castle to cool down or split to a friendly country and engage in some good will tour among former subjects.
But, in this case, being Good Will seems unlikely to ease tension. In fact, always being Good Will is apt to increase it.
He’s not like the rest of us. He can’t storm out of the house and down to the pub to unload on marital difficulties as so many commoners do. Really, a little distance with some friends puts everything in perspective.
If it’s tense at home, I often like to head to the bar, have a pint and engage in distracting arguments with my buddies about pointless things like why the Pirates stink.
The pressure Will and Kate are enduring already seem crushing. I never cease to be amazed at the pressures young couples bestow on themselves by hosting enormous weddings -- and by enormous I mean ones involving about 200 guests -- not guests from 200 countries, as is being reported will attend.
But they have their silly protocols. It’s a national event, one that’s swept around the world in an appalling hype tsunami.
I have vain recollections about our 1996 wedding. It was perfect.
We had a small family wedding in our little church, then a quiet dinner with family at one of our favorite restaurants.
Then the next day we had an “All Honest Strangers Welcome” pig roast at a local picnic park.
Anyone was welcome who would by attending pledge to at least try not to steal our stuff. We found that people, even outlaws, are generally respectful if you tell them they’re welcome to party, get pie-eyed, and eat for free if they agree to not steal towels, envelopes or glassware from the gift table.
I guess about 250 friends and honest strangers showed up.
That’s where one of my old friends pulled me aside and told me to always argue naked.
While I’ve never applied the wisdom to my own marriage, I have without fail passed it on to every bride and groom I’ve met since that splendid September day.
One of these days I really ought to try it with Val. But it’s a nerve-rattling proposition for a shy sort of guy like me.
Maybe I ought to test drive it elsewhere first.
I wonder how it would go over in the bar if the next time I started arguing about why the Pirates stink, I just started to shuck my duds.
Posted by Chris Rodell at 2:42 PM

Never argue in the bedroom, that's the advice this professional hands out. Which means you'd have to argue nekkid in the kitchen. Ew?

It pleases me a professional psychiatrist reads my blog and has yet to summon the authorities. I must be doing something write.

And a lovely wedding it was.......
your bride was beautiful, as you well remember!
My husband and I may argue about theology occasionally (occupational hazzard) but our rule is, "Never when we're naked." Leave it at the (berdroom) door.
Easter blessings from Pastor Judith!

I'd love to hear those theological arguments between you and your husband, Judith. I'm sure they're fascinating.

So great to hear from you, especially here on my blog!

I hope you'll continue to check it out and refer it to friends whenever you find it worthy.