I am becoming left handed 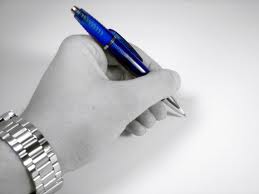 I may not be the best writer, but I’ll wager I’m the only writer who can do 10 regulation Army pull-ups and juggle.
Not simultaneously. Not yet.
It’s probably not the kind of boast you’d hear from writers like Stephen King or John Grisham, but it suits me.
If even hack psychologists diagnose I’m trying to compensate for so many professional shortcomings, so be it.
I like the fact that if I ever had to arm wrestle either of those two best-selling titans I’d have them both screaming uncle and racing back to their limos.
But that achievement will pale in comparison to my next great quest.
I’m becoming left handed. I’ve been willing myself to cease using my dominant right hand for all the menial tasks I reflexively summon it to do.
It dawned on me years ago the laziest part of my whole ever-loving lazy body was my deadbeat left hand. The right hand did everything and when it came to doing even the least of motor skills, my left hand never bothered to lift a finger.
It was unfair. It was like a marriage where the one spouse good-naturedly does all the work while the other one sits around and schemes of doing things like becoming left-handed.
But I digress.
So now I brush my teeth, shave, work the computer mouse and do things like button shirts with my left hand.
I  still wouldn’t trust the southpaw to toss darts when there’s a pregnant woman within 10 feet of the cork, but it can certainly lift a 12-ounce beer mug every once in a while.
Our over-reliance on our dominant hands throws our whole bodies out of balance.
It’s true. Ask any tailor. They’ll tell you our dominant hands are as much as an inch longer than the ones that do little more than dangle. Can you imagine how the progression of such natural atrophy could effect people who make sleeves?
My goal is pure ambidexterity.
It’s just so cool not to mention, well, handy. Both Michelangelo and Leonardo da Vinci were ambidextrous and would paint with both hands, switching when ever one got tired. British artist Sir Edwin Henry Landseer (1802-1873) was famous for drawing with both hands simultaneously -- a horse’s head with one hand, a buck’s antlered head with the other.
Benjamin Franklin was ambidextrous and signed both the Declaration of the Indpendence and the Constitution left-handed. That he didn’t think to sign one right handed and the other lefty is the only intellectual blemish on America’s greatest rascal.
This isn’t purely theoretical. Painful misadventure will result in many of us one day winding up in slings. Worst case scenario: What if during one of my midnight strolls I stumble into a bear with a palate so discriminating it consumes only right arms?
Much of my motivation comes from being a really bad writer -- and not the occupational kind, although skimpy professional accomplishments heave the subject into question.
It’s my handwriting. It is atrocious. Elegant penmanship is something I so admire. It’s a vanishing art I turned my back on in about the fifth grade when I saw Jon Logue writing in little block letters and thought it looked really neat.
Today, it’s impossible for me to writing anything in cursive beyond my own name, a pathetic scrawl that.
So I’ve for years been resenting my right hand. Even what little I ask it to do, it does poorly. If it were a second baseman, I’d yank it from the line-up and give the new kid a shot.
That’s what I’ve been doing with my left hand.
My goal is to learn to sign my name left handed in a more stylish flourish than I do with my right. That’d be a good gauge of success.
Studies show a direct correlation between involvement in motor skill exercises and brain growth. Our brains sleep walk through routine tasks, but comes alive when we challenge it with unfamiliar tasks.
My ultimate goal is the increase my brain power to a density sufficient enough to differentiate between foolhardy tasks and ones that might lead to actual income
And I hope observers will one day be able to detect results more tangible than equidistant arms that look snazzy in sleeves.
Being known as someone who writes badly with both hands would be professionally unwise for an otherwise even-handed guy like me.
Posted by Chris Rodell at 1:49 PM

Nice post, north-south-paw. Challenge that brain. I find it frustrating to do much with my southpaw, so I guess it'll just wither away one of these days, and I can start buying irregular long sleeve shirts.

I'm ambidextrous but I call it cross-dominant. I do many things left handed as in tie my shoes - deal cards, count money. I can shoot pool left or right handed. I right with my right hand but can force myself to scratch out some writing with the left hand it just takes more thought. I throw right handed but am left footed.

So what does that mean? Nothing. I'm just mixed up and my brain, well it doesn't seem to be expanding. Or may be it is and that is why I forget so much, those thoughts are farther a part.

Thanks, fellows. Keep an eye on that arm as it atrophies, Keith. And, Max, I admire your cross-domination trait. I'm going to side with the expanding brain theory on you, my friend.

If it helps, my handwriting improvement site has a section for lefties — http://www.HandwritingThatWorks.com

Thanks, Kate. I'll be happy to check out your website. Sounds helpful. Happy Memorial Day!