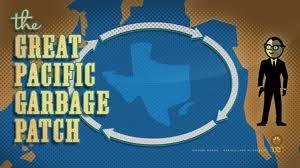 Like any earth-conscious soul, I’ve been troubled ever since learning of the existence of massive floating islands of plastic garbage sprawling across the planet’s oceans.
One, the Great Pacific Garbage Patch is, according to Save My Oceans, twice the size of Texas.
That comparison seems unfair -- to garbage dumps. The Texas Hill country is splendid, but much of vast west Texas is so desolate even native troubadour Joe Ely says it only holds scenic appeal to men just released from long stretches in the pen.
But what to do about continent-sized masses of plastic garbage floating in our once-pristine oceans, most of which could probably have been recycled.
Clean it up? That sounds utterly futile. It’s just too massive.
And where would you put that much garbage? I guess even west Texans would oppose it being dumped all over them -- although all that shiny plastic would certainly add welcome sparkle to the landscape’s bleakness.
I say the solution is to colonize it.
But with whom? Should its purpose be penal or pleasure?
I thought long and hard about an idea that seemed to make perfect ironic sense: a Garbageological Guantanamo.
I thought it should be a penal colony for anyone who’s ever been busted tossing a Coke bottle or McDonald’s cup out the window.
But I had to discard that idea because I realized that over-population would soon sink the plastic island. There are just too many people who just don’t give a damn. They toss plastic bottles and trash-filled grocery bags out the windows of their cars all over my quaint little town.
I’d understand this if, say, their cars were about to be used in the royal wedding parade for Will and Kate. But that’s usually not the case.
Their cars are crap, too. And they dress like bums to boot.
It’s a pity because most of the really trashy people on the planet can’t be shamed into not littering and they are so pervasive that I’ve never heard of a single person getting busted for littering in a world that is literally awash in trash.
So until we change the laws and allow for vigilante homicide of petty litterers, there’s nothing we can do about it.
Then I thought maybe we could skip the common white trash trashers and go after the big guys. You know, the corporate big shots who are polluting our streams and air with careless business practices that earn them millions while poisoning the planet.
I know, I know. It was just a joke. We don’t punish people who do that. We offer them tax breaks. It’s stunning the multi-million dollar give-aways Pennsylvania Gov. Tom Corbett is showering on fat cat donors from the Marcellus Shale gas industry at the same time his budget is forcing teacher layoffs all across the state.
So how about this? Instead of disparaging the massive plastic islands that are killing our marine life, we promote it as posh island living.
Yes, island living, the epitome of modern chic. People dream of hitting the lottery and picking up and moving to St. Barts or Virgin Gorda.
It would be an easy sell, I think, to pitch condos on an island that can pick up and move so residents wouldn’t have to.
Either way, something must be done. This is a very depressing problem on levels ranging from intellectual to just plain icky.
Researchers say more than 100,000 marine mammals and one million seabirds die each year from ingesting or becoming entangled in plastic.
So the fish eat the plastic and then we eat the fish. It’s a dreadful cycle destined to end, I guess, with the food chain becoming a real chain like the kind hardy mountain folks put on their tires to negotiate deep snow.
Fish are attracted to the the shiny bits of plastic for the same reason deceptive Rapala lures work so well.
If it keeps going like this, the fresh sushi I so enjoy will differ little in content from the little plastic replicas they put in the windows of the restaurants to lure in guys like me.
It’ll be a sad day for anyone hooked on sushi.
As if planetary matters could get any more sad.
Posted by Chris Rodell at 10:42 AM