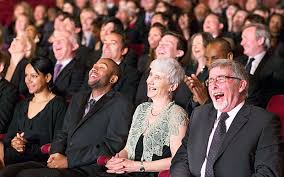 • It says something wonderful about simple human decency that ever since word got 'round I have an incurable disease more people have told me I look great than ever told me back when, gee, I really looked great.

• You can gauge the true happiness of any person or family by the amount of time it takes for the smile to leave their faces after the picture's been taken.

• I predict the next big body alteration movement will be the detachable nipple, so urged by the fashion industry for a sleeker bosom. Think people panic over a lost contact lens? You wait.

• I wonder if fruit flies ever tire of their holier-than-thou diet one day and just say, "Screw it. Tonight I'm having cheeseburger!”

• Bible makes clear God has blessed man with the gift of free will. Show of hands: who follows the news and wishes He would become just a bit more of a control freak?

• I enjoy looking at pictures from old high school year books and trying to guess which students are aliens and which are human. Usually in cases like this, my guess is they're all the former.

• Devoted linguists who spend an inordinate amount of time studying obscure dialects forgotten by all but the most arcane scholars are Accent-rics.

• This is the season when warm temperatures confuse people into thinking we should be doing everything outside. Let me remind you that very little has changed since the age of the cavemen. Outside is the reason man invented inside.

• I’ll bet there are many days each week when Dick Cheney wakes up and is stunned to realize he is no longer President of the United States.

• The next breakthrough in the battle against climate change will result when some genius discovers a way to convert all our fake laughter into clean renewable energy.

• Chicken wings are among our most ubiquitous meals, yet in all my life I've never seen a single airborne chicken. Question: How different will our urban landscapes become when our nation's menus begin including pigeon wings?

• Dictionary definition of dictionary is “A book which explains or translates, usually in alphabetical order, the words of a language or languages, giving for each word its typical spelling and usage.” A bit verbose, isn’t it? Guess I can't blame the dictionary for being, well, wordy.

• Unlike here on Earth, I hope in heaven -- fingers crossed -- I become blessed with the ability to fix things. But I worry in heaven nothing'll ever break and my feelings of uselessness will persist.

• There ought to be a game show where top rock stars are quizzed on things like who can say things like, "Are you ready to rock!" in the most foreign languages.

• The deep, soulful satisfaction I get from squashing a common house fly with a lightning-like bare-handed swat  has me re-thinking my native pacifisms.

• Freedom (pronounced FREE-dumb) isn't free. And dumb can be pretty pricey, too.

• I appreciate the wisdom of the Bible verse that advises we love our neighbors as we love ourselves. But speaking for narcissists everywhere, the premise is just preposterous.

• When you're in worship and the preacher begins telling stories of notable Bible figures, do you in your mind picture them as having perfect teeth? That's probably unrealistic. Question: Could you follow The Savior if He had real Billy Bob teeth?

• A game show where contestants had to pick between Mr. Keith impostors and the real deal might be popular: "Toby or Not Toby: That Is the Question!”

• Looking in the mirror when you wake up can ruin your psyche for the whole day. Me, I try not to look until I've had at least three beers.


• I agree with the shrill MAGA voices who say in America today minorities need to “know their place.” Well, my dark-skinned brothers and sisters, your place is right beside me. Unfortunately for both of us, we’re both way back in line behind a bunch of much richer white guys.