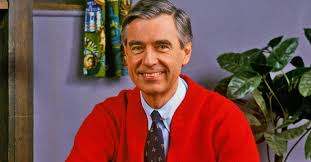 “They were helicopter parents years before most Americans had ever even seen a helicopter. That’s what most parenting “experts” would say about the way James and Nancy Rogers raised the baby they named Fred McFeely Rogers, born March 20, 1928. They refused to allow him to mingle with common classmates. They spoiled him, smothered him with parental love. What this says about a widely derided parenting technique is best left to the experts, but clearly some children of helicopter parents are destined to soar.”

• That’s the lead to the new book I hope will be available around Labor Day. The title for now is, “Growing Up In Mr. Rogers REAL Neighborhood: Life Lessons from The Heart of Latrobe.”

• I was embarrassed — well, even more embarrassed — to be seen driving my ’07 Saturn Vue (210,082 miles) after a slow speed nick surgically removed the entire grill. So I impetuously painted Dale Earnhardt No. 3s on the doors — bonus points to those who recognize it as a homage to Woody Harrelson’s “Tallahassee” character from the hilarious 2009 spoof, “Zombieland.” I posted pictures with me holding my zombie-slayer knife and we all had a good laugh. Now, four days later, I’m embarrassed again.

• A 2008 survey of 3,000 British teenagers found that no fewer than 20 percent of them thought Winston Churchill to be a fictional character. The same survey found that 58 percent thought Sherlock Holmes and 47 percent thought Eleanor Rigby were real folks. It’s heartening to learn moronic children are an international phenomenon.

• The obligation I feel toward this deadbeat blog is pure madness. It pays squat, yet devoted readers tell me they’re upset when I let it languish like I have this month. Behold the irony: I ignore it for eight days in favor of trying — trying, mind you — to score a tidy payday, and I worry the hiatus might upset readers who for the most part would never dream of paying to read it. No wonder I drive an embarrassing vehicle.

• I doubt I’d pay to see them again with my tight finances, but what the Rolling Stones are doing this tour is breathtaking. We’ll not see the likes of them ever again.

• The Hon. Gov. Tom Ridge has graciously agreed to provide the book’s promotional foreword. My favorite line: “Chris writes about Latrobe the way Sinatra sings about New York, unflinching about the gritty realities, but with abiding affection and relentless positivity about the future.”

• One of the best nights I had selling the Palmer book was a pre-Christmas signing right here at The Tin Lizzy in Flappers, the beguiling second floor bar beneath my office. I sold a lot of books, made a bunch of new friends and bartenders Zach and Aaron sold a lot of Arnold Palmer drink specials. We’re already trying to conceive a drink exclusive we can call The Mister Rogers. We’re nearing consensus that a Mister Rogers should be room temperature tap water.

• That’s a cheap shot, albeit a funny cheap shot, from three renown boozehounds on a lifelong teetotaler. But he was anything but a milquetoast. I’ve unearthed some tremendously soulful stories about Fred. Contrasting the upbringing of this sweet, gentle soul with the rowdy Latrobe I for the most part inhabit is leading to what I think will be a book even more compelling than “Palmer: Homespun.”

• How did the word milquetoast become a pejorative to describe an ordinary bore when it by all means ought to be a snappy breakfast order at the neighborhood diner?

• I do love my wordplay. When I get back to more consistent blogging I’ll probably do something with this … “There must be a baker's equivalent to ‘piece of cake’ that is not ‘piece of cake.’ Because if a baker says something is going to be a piece of cake and shows up with, say, a pie instead he could be accused of loafing -- and don't get me started on bakers who loaf.”

• And this … “Megan Rapinoe says US Womens Soccer victory has team ‘on Cloud 9.’ She's mistaken. On-going gender equality issues mean they're only on Cloud 5.”

• “America used to really watch Mister Rogers. Maybe now it’s time America began to really study him. Two Ohio educators are spearheading a nascent movement to persuade the world to view Fred Rogers, not as a popular children’s TV host, but instead as a transcendent cultural figure along the lines of Mohandas Gandhi and Martin Luther King Jr.”

• Val and I are now in the happy habit of watching old “Cheers” reruns at bedtime. The show still holds up. I’m amazed at how deftly they introduce new and uproarious characters on a near-weekly basis. Seeing Frazier, Lillith, Ma Claven, Woody and others drop in and be hilariously impactful right away is a marvel.

• One dispute: Val likes to skip the “Where Everybody Knows Your Name,”  theme song and I could listen to it over and over. I think I feel this way because the song always reminds me of home. Odd, I know, because, well, I am home.

• My heart warms every time someone compliments my Adelphoi commencement address, as someone does at least once a week. Need a speaker? I’m your guy. You may not know it yet, but I’m your guy.

• “We’ve made this our home. We’re never leaving Mister Rogers Neighborhood. After reading the stories in this book, I hope it never leaves you.”

• That’s the book’s last paragraph. Now all I need to do is finish all the stuff that goes in between. 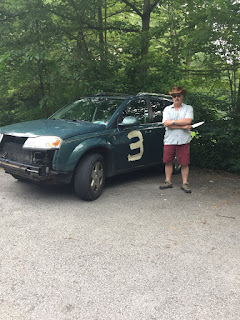