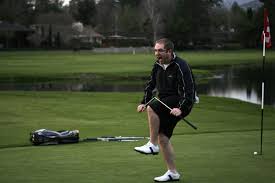 The much anticipated round of golf at Olde Stonewall, one of Pennsylvania’s finest golf courses, hadn’t gone as we’d hoped. We’d all played poorly.

Clubs were broken, profanities shouted and questions considered about the wisdom of ever golfing again.

As one who by now has been golfing badly for nearly 50 years, it was up to me to save the memory of what would have been a blissful day of camaraderie and laughter had we not been foolhardy enough to include actual golf in the mix

I knew just what to do.

Change the subject to sex!

And luckily I years ago committed to memory the greatest line about golf that isn’t about golf but is in fact about sex. I heard it from a guy who’d gone golf crazy in six quick months. He said:

“The first time I golfed was the most fun I’d had at something I was so bad at since the night I lost my virginity.”

It’s a great line. My friends had heard me say it before, but for some reason this time it launched into a lively conversation about the first time we, as I’ve heard it described, “line danced at the Bush inaugural ball.”

It was a revelation. Not just that all their ribald stories were entertaining, but the fact that the younger two friends had, in fact, had sex. Sure, they’re great guys, good company, but I just have trouble believing either of them had found women so reckless about their reputations as to willingly bestow carnal favors.

And one of them is a father!

Of course, I kept all this to myself. Saying it aloud would have surely invited vicious backlash about my own issues with age and homeliness. Even worse, my story is a real bore. So I just sat there silently vowing it’d be the last time I’d have the lamest virginity-vanquishing story at the table.

If my first-sex story was a snoozer, I’d just have to make up a better one.

I know some of you are shocked I’d lie, but I’ve always advocated liberating our past from its truthful shackles. It just makes every conversation more interesting. It’s why I still tell church friends I put myself through college working as a stripper.

Our sexual pasts are especially ripe for dramatic embroidering.

For conversation’s sake, I’d much rather get stuck in an elevator with a chatty whore than an honest virgin. Plus, you never know when you might find use for babe-it-might-be-up-to-the-two-of-us-to-repopulate-the-planet argument.

That would make a dandy lose-your virginity-tale, but I fear my story would unravel under intense questioning: “Where was the lift? How long were you marooned? And given your experience, how come I’ve seen you take the stairs?”

It would make a good story if I lied and said I lost my virginity on my old paper route, and that has a high believability factor. Many apartment occupants were young singles, restless brides, and working girls eager for randy relief. In fact, I remember one shapely 30-something who invited me in for refreshment. It could have happened then, but I was too dedicated to my duties to pause even for possible romance.

I know, I know, that has a very low believability factor, but it’s the truth — and why that sort of work ethic didn’t carry over into adulthood is a pity and an enduring reason why "paperboy" remains my answer to the question, “What was your most lucrative occupation?”

But I think I’ll concoct a lost virginity story about the day I had my tonsils removed when the young nurse waited until the recovery room was empty and my voice was still too raw to alert the staff about her unusual therapy.

It has the potential to be a lively story and far more interesting than the bland truth.

I was nervous. I was afraid a satisfying performance was beyond me. I felt like I feel today standing on the 1st tee when other golfers are watching.

But with age comes wisdom and I’m wise enough to appreciate the value of artful fibs as shock absorbers on the sometimes bumpy road to a long and happy marriage.

So that's my story and I'm sticking to it.

The Christmas when romance (& me) were Frosty

Does hitting a pink golf ball make me less manly?