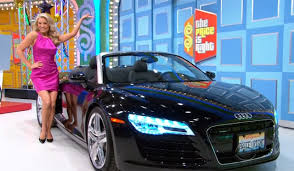 My family is disappointed I’m not more excited about having purchased what they’re misleadingly calling my “new” car.

Setting aside the fact that one of the keys to happiness is to avoid letting the emotional reactions of others determine yours, I’m a stickler for accuracy and reject their description that my car is “new.”

My daughters are 18 and 13. They’re not new either. I tried to give them some perspective.

“That so-called ‘new’ car is now old enough that if it were a person it could get a driver’s license and legally drive itself to the high school where it would be enrolled as a junior.”

“New? If there were a boy conceived in its backseat he today would be able to cruise for chicks who’ll join for in that same backseat for a joyful boink. Circle of life, baby.”

Me, when I hear about potential tranny performances, I prepare to defend my LBGTQ sisters/brothers/others against the latest divisive Trump tweet.

Gray is “The Price is Right” studio announcer and when he says a car is new he means it’s never been driven, it’s clean, no one’s screwed in the back seat (former host Bob Barker doesn’t count). When George Gray says it’s a new car, by God, it’s a new car.

It would be funny to see the reaction of the show’s reliably hysterical studio audience if George Gray said, “It’s a new car!” and out rolled my 2004 Honda Pilot. The reaction would be the same as if George Gray announced to 200 3rd graders on Christmas Eve, “There is no Santa Claus!”

Buying a new car should be confetti, balloons, hugs and handshakes and a happy family road trip to see how she rides.

Buying this car involved whispered assessments of used car salesman trustworthiness, prayers it will start and persistent worries the stale fart smell ain’t going no where.

Plus, I now have to decide what to do with the “old” vehicle, the one that’s three years younger than the “new” one.

The worst part is now being daily forced to confront the fact that I’m this far into my what-for-lack-of-a-better word must call my “career” and my only option was to buy a $2,600 “new” car I’m not sure I can trust to get me the 1.2 miles to the place I, gulp, earn my living (and spend it).

Where, oh, where did I go wrong?

It was probably in 2008 right around when the free On-Star subscription expired.

The situation has me fearful of what’s next when my new car overnight becomes old — and this is no hypothetical. It’ll be old in every sense of the word by Thursday breakfast.

It’s unlikely my earning power will increase significantly in the next 16 hours.

The next step could be a car that runs on actual steps like the one Fred Flintstone hoofed around Bedrock.

Despite the humiliation, It could be my destiny. Really, all I need is a scooter with a decent stereo or maybe a horse that sings.

The latter might be better cause then I could talk to the car guys about real horsepower and not sound like some kind of jackass.