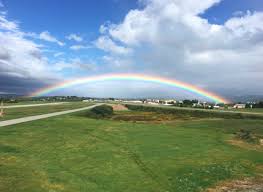 That’s a pity, not to mention a solid argument against cremation.

Historians said George Washington had a morbid fear of being buried alive.

I call it rational.

I can’t tell whether I believe Palmer’s really dead or that a man that magnificent ever really lived.

Attending his memorial only made it worse. So much of the day seemed so surreal, like a dream.

Me, Val and a buddy of mine got there 90 minutes before the start of the 11 a.m. ceremony. In some regards, we arrived late. We barely got a seat clear in the back.

The pews were packed with golf royalty.

We sat right next to Bob Goalby. He won the Masters in 1968 after Roberto DeVicenzo famously made a scoring error and was disqualified after innocently attesting to the mistake by signing the scorecard. The incident is still recalled any time the haughty precision of the rules of golf are debated.

Goalby, 87, didn’t say anything about that.

He did say he today hits tee shots like he urinates: “It goes out just a little bit then it just trickles away.”

Seated in front of us rocking a neon blonde punk buzzcut was a friendly Connellsville woman who said she was Palmer’s twice-a-week masseuse. What did Palmer say to her?

“He asked if I thought he’d look good with a haircut like mine.”

Professional ethics, she said, prevented her from dishing any further intimacies.

Who knew masseuses had ethics?

They should all run for Congress.

I shook hands or made small talk with Ernie Els, Tom Watson, Annika Sorenstam, Lee Trevino, Phil Mickelson, Nick Faldo, Tom Ridge and Ricky Fowler to name just a few. Darius Rucker was there, too, as was the Ryder Cup.

We had a great chat with Dow Finsterwald, also 87, winner of the 1958 PGA Championship and a proud native of Athens, Ohio. He talked with boastful pride of his Ohio University connections, something I find obnoxious in others but, hey, they’re not Bobcats.

The speakers were almost all funny or moving  — Jim Nantz especially — in sharing their Palmer stories, except for Tim Finchem, who like any sports commissioner is apt to do, came off sounding like a grinding accountant.

Palmer grandson Sam Saunders told a great story about how his grandfather never let anything come between him and his loved ones. He said he called and asked Palmer what he was doing.

Palmer said he was talking with the president.

“The president of what?”

“Of the United States.”

Saunders asked why he took his call when he was standing in the Oval Office.

“I wanted to talk to you,” Palmer said.

It could have been Bush or it could have been Obama. Saunders didn’t say and the whole day was a welcome respite from political divisiveness. Palmer insiders told me they were adamant in rebuffing the shrill desires of one presidential candidate who was eager to be seen attending.

Because I strive to keep this blog free of political divisiveness, I won’t reveal his name.

Vince Gill was pitch perfect in his every utterance, but I’ve never seen him when he ever wasn’t.

After Jack Nicklaus told a story about how a then-stoic Palmer had admitted to tuning out his hearing aids the day he was honored in D.C. with the Congressional Medal of Freedom at which Gill performed, Gill deadpanned, “He said I was his favorite singer. Now I know he never heard me sing a note.”

Gill, who has been coming to visit Palmer for years and is the runaway celebrity crush of the sweethearts who work in Palmer’s office, said Palmer was his favorite person.

“Not my favorite golfer,” he said. “My favorite person.”

It was a damn fine dream.

It's a shame it ever had to end.