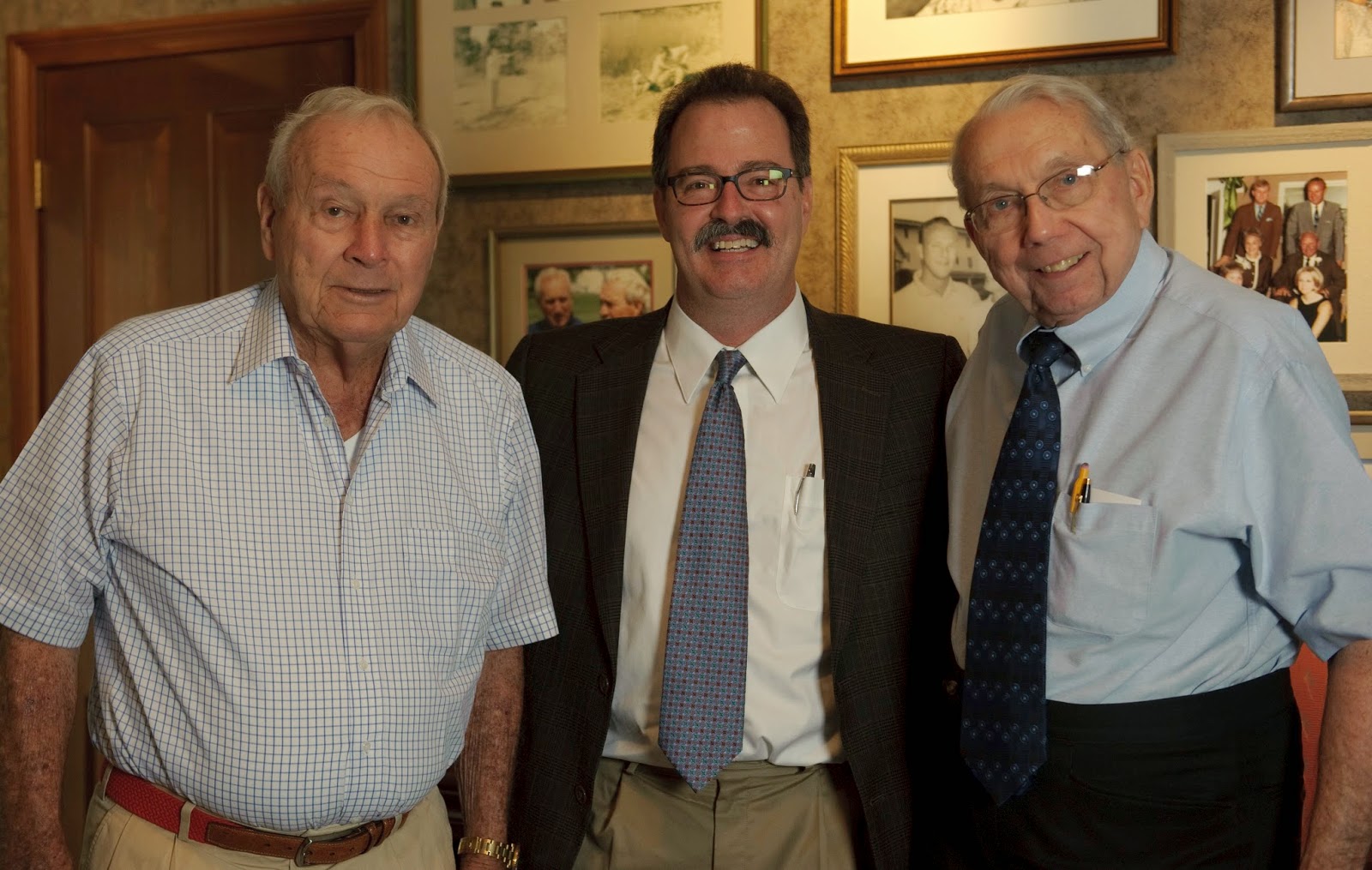 I’m set to golf today at Oakmont C.C. in about four hours. The fact will no doubt stir resentment among my golfing friends.

Oakmont is one of the most prestigious golf clubs in the world.

Well, let me rub it in a little more. I’ll tee off after I bid Arnold Palmer bon voyage on his way to Florida. One of my partners today is Doc Giffin. He’s been Palmer’s able assistant for the past 45 years, and Doc asked me to pick him up at Palmer’s Latrobe office where he wants to say goodbye.

And I get to tag along.

I’m on a bit of an Arnold Palmer roll right now.

And by “Arnold Palmer roll,” I don’t mean the man behind the hip Arnold Palmer tea has added a trendy new sandwich to his culinary endeavors.

I interviewed Palmer Friday for about the 75th time in the past 10 years. I started off, as I always do, with a real toughie.

“Mr. Palmer: on Monday you’re departing Latrobe for Orlando where you’ll spend the next six months while we here in Western Pennsylvania endure the wind, the snow and ice. My question is: Will you please take me with you?”

I know this because at the conclusion he told me I’m the best interviewer he’s ever had. He said, “You are the best. It’s always a real treat to sit and talk with you. You’re funny and you ask great questions. I always really enjoy these interviews.”

You’re probably thinking, well, one of the reasons Arnold Palmer is so popular with the media is because he says that to everyone.

That may be true, but if it is I found out he’s said it to me more than anyone else.

Bob Drum is a legendary Pittsburgh sports writer who chronicled and assisted in Palmer’s rise to legend. I asked Palmer how far I had to go until I reached Drummer status.

“You’re right there,” he said. “I don’t think anybody’s interviewed more than you. And that’s saying something.”

Coming from him, it was incredibly flattering.

And I had it all recorded!

Or so I thought.

I floated out of the room thinking I could take this precious audio and make a great YouTube clip of one of the most interviewed and popular men in the world saying I was the best.

Heck, Trump posts it on his website if Palmer deigns to pose for a picture with him.

So I get to my office and, I admit, foremost on my mind wasn’t transcribing the interview for which I was being paid. No, it was how I was best going to use the Palmer praise to make myself look monumental.

It was all I had on my mind.

And that’s probably the reason I somehow deleted the whole thing.

Gone. All of it. From a fool-proof iPhone!

I wasn’t really worried about the interview. Everything he says is burned into my brain and the Q&A format makes it easy to duplicate (Doc later told me it read like a transcript).

But what was I to do about the part where Palmer said how great I was?

To ask Doc if I could come back and have him say it all again would be unseemly.

I did it anyway.

And to really up the unseemly ante I asked if this time I could film him doing it while holding a copy of my book. I was intent on an offhand compliment into a full-out infomercial.

I tell you, when it comes to shameless self-promotion, I got crass coming out my, er, ears.

But Doc said no. The timing couldn’t be worse.

So my hopes to enrich my life through something Arnold Palmer said were in vain.

There are other compensations. See, knowing Arnold Palmer means you can always get great golf tips from Arnold Palmer.

That’s what happened when I told him I was playing Oakmont. I asked if he had any suggestions about how I could get a really good score today.

And, indeed, he had a great tip.

He suggested I play someplace else.