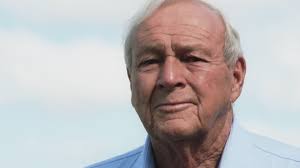 My standard admonition that every well-lived life concludes with loved ones bitching about parking difficulties at your funeral is about to undergo a winged revision.

As we’re about to witness, a life truly well-lived involves pilots complaining about difficult-to-obtain landing permission as they circle the skies above the airport named in your honor.

That’s what we’re experiencing in Latrobe today as we seek to memorialize Arnold Palmer.

News reports say organizers are preparing for as many as 10,000 people to make the drive down Route 30 to St. Vincent College.

I think they’re low-balling. It could be twice that.

Pittsburghers drive to St. Vincent out of habit. Each summer they become like migratory birds, albeit ones with beer bellies and Steeler fan tattoos. St. Vincent is where the Steelers practice and Pittsburghers love a winner.

And Palmer was a winner in every way.

I was raised to think this way by my father who idolized the man. Lots of our fathers did and many still do.

So I have a hunch a bunch  of people are going to woke up today, saw the sunshine and read the news about the memorial and reflexively began driving to Latrobe.

Gates opened at 8 a.m. and guaranteed there will be tailgates.

The memorial will be in the Basillica, but they’ll be closed-circuit hookups in gyms and auditoriums.

I was surprised when an invitation came for me. It seems legit but I prophesy an awkward encounter with security where they doubt my credentials.

How eager am I to ensure I get a good seat?

Besides the invite, I’m taking the “Use All The Crayons!” deluxe-sized poster board because it in large print includes Palmer’s prominent endorsement of my book.

If I don’t get in I think I’ll just go to the stands at Chuck Noll Field. I think that’s where Palmer would go if Palmer were alive to memorialize himself. They’re putting up big screens and it’s there where attendees will have the best view of Palmer’s plane as it makes one last ceremonial flight over the college.

It’s a somber ceremony, but in Latrobe it’s starting to feel like a party, a celebration.

I thought of this Friday when I popped in for a drink at Flappers, the second floor bar right here at the Tin Lizzy.

I’d spent a great night with my friends and didn’t feel like heading home just yet, so I pulled into the Tin parking lot — and talk about your reflexive vehicular maneuvers.

The bar was empty, but on the porch there were about a dozen people having what sounded like a riot every 90 seconds.

I asked the bartender what was going on.

“Oh, they’re telling Arnold Palmer stories,” she said. “They’ve been out there for two hours. I don’t think they’re ever going to leave.”

I stayed for about 30 minutes and it was like you could have set your watch; a roar of laughter every 90 seconds. I thought someone was going to call the cops.

I’m sure they’ll all be there today.

The Palmer family is adamant about wanting the public to attend. Everyone wants a good seat.

But a friend of mine reminded me he’s going to have one of the best seats of all.

“I’m staying home and watching it with my Dad.”

My encounters with The Legend were always on a professional level but even though he always remained the consummate professional, there was a personal, intimate, character that he projected that made me feel comfortable and significant... as if I were important to him like a friend, not another acquaintance, or media representative.

Of all the personalities I met throughout the course of my career, Mr. Palmer always made me feel good on our parting. His smile was always genuine, as was the kind look in his eyes. I am thankful for our paths crossing, and will always cherish the memories that he created for me, and all the lives of the common people who he touched.

Thanks, Denise, and you're right, Todd. He really had a gift for making everyone feel special. Locally, we were so lucky to be able to interact with him and experience that joy.