Church rules on cremation & what we did with Dad 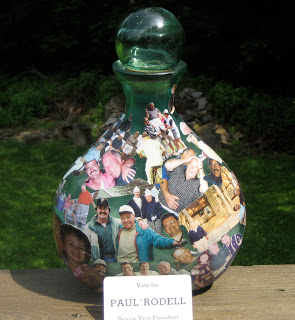 Procedural Vatican news about the care and preservation of human cremains has me belatedly wondering if we did the old man right.

Papal officers say cremation is permissible only if the ashy remains aren’t divvied up, strewn about or kept on some mantel at home. They must, instead, be stored in a sacred, church-approved place, someplace holy.

It’d be a relief if there turned out to be a typo that was intended to be someplace “holey.”

We’d certainly be in partial compliance.

Between us, my brother and I have scattered portions of our late father at Augusta, Oakmont, Whistling Straits, Firestone and maybe a dozen other golf courses.

We’re informed it’s improper to divvy, but divvy we did. Me and my brother each took half.

Dad weighed about 200 pounds at the time of his death. Singeing that much bone and sinew at about 1,700-degrees Fahrenheit — the process lasts one to three hours — leaves you with just about five pounds of fine ash.

Mine are in the above wine decanter on the top book shelf in my basement.

I spent a good many hours trimming candid pictures of Dad and affixing them to the wine decanter. It was a true labor of love, love and goopy decoupage.

I keep it on the top shelf — Dad was a top shelf kind of guy — between my two all-time favorite books, “Catch-22” and “The Grapes of Wrath.”

I spend a lot of time in that basement room watching sports, reading or relaxing by the fire. I’ll often look up and think about Dad. Having him close like that gives me a peaceful feeling.

Despite what the Catholic church says, I’m relieved I don’t have to dress up and go to some sacred property to commune in places where I’m afraid to do things like fart when I feel farting.

Until I’d read the edicts, I thought we were treating Dad’s remain with a precious modicum of dignity.

We don’t keep him in a church, but he is in our hearts, which is better than up our noses.

Keith Richards in ’07 told reporters (he later recanted) that he mingled some of his father’s ashes with some fine cocaine and — Toot! Toot! — snorted the merry mix.

I didn’t see any restrictions against that in the Vatican story, but I guess they felt common decency meant some guidelines could be left unsaid.

They didn’t count on Keith!

Other offbeat options include cremains becoming a part of tattoos, jewelry, fireworks, beer mugs, coral reefs or being shot into space.

I wish you could have known my father. He was just beloved, a real joy.

In his later years, I used to like to take him to parties or have friends meet him in bars near his South Hills home. All I’d say was, “This is my father. I think you’re going to hit it off.”

Then I’d just watch him talk. He’d ask about their families, where they worked and what kind of beer they kept in the home fridge. He genuinely cared how they were doing. He only talked about himself when he was asked and when he was asked he always answered honestly.

I’ve come to conclude people were just so disarmed that someone so warm and open-minded walked among us.

Everyone who met him carried a part of him with them for the rest of their lives.

I don’t care what the papal poobahs say.

Men that marvelous ought to be spread far and wide.