Monkeying 'round with bananas (from '12) 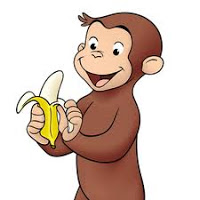 Hearing from lots of new readers these days. I’m very pleased. So to stoke that fresh interest I’ll be dropping some of my favorites from my more than 1,600 posts dating back to, yikes, 2008. I hope it’ll give readers a chance to enjoy some of the heirloom ones without having to browse through obvious stinkers. If you look forward to the blog, I hope you’ll share it with friends or have them send me Facebook friend request. And I thank each and every one of you for taking the time to read and flatter me with your compliments. Means the world to me.

I was thinking about this as I was listening to a string of great monkey rock songs -- and wouldn’t that category improve the Grammys?

There’s “Monkey Man,” by The Stones, one of their finest; “Shock the Monkey” by Peter Gabriel; “Punish the Monkey” by Mark Knopfler; and the cheeky “Tweeter and the Monkey Man” by the Traveling Wilburys.

It’s a horrific story and I always feel shame for chuckling when recalling the tabloid headlines: “Furious George!”

I think we’ve all had enough monkey business for one day.
Posted by Chris Rodell at 9:27 AM