My compliments: my day with the PR&LA 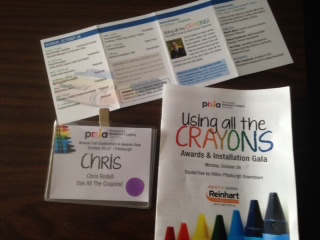 Until very recently, most of the compliments people have said to my face have been rectal in nature.
It was like that in ’14 when I lost a bone-headed game of red light chicken with a monster truck near downtown Pittsburgh (link below). The wreck was my fault, sure, but the guy said he had no intention to escalate the legal or administrative stakes.
“I could tell just by looking at you you’re not an (sounds like “castle”).”
Then there was the time in 1992 I quit my job at the newspaper and one of the tough guy pressmen came up said the boys were going to miss me.
“Yeah, you’re about the only guy in the whole newsroom who doesn’t walk around here like he has some giant stick up his (take a wild guess).”
I thanked him and said I’d rush to a proctologist if I ever detected symptoms of any anal arbor.
So the bar for heirloom compliments is, for me, set rather low. Below the belt, certainly.
Maybe that’s what made last night so wonderful.
I had dozens of people come up and say nice things about me and not a one of them involved my lower gastrointestinal tract.
Some of them even said I’d cured their hangovers.
That’s something, according to Scripture, Jesus didn’t even do, although bringing the dead back to life is kind of on par.
I’d spoken early Monday morning to about 50 members of the Pennsylvania Restaurant & Lodging Association at the Doubletree Hotel in Pittsburgh.
It went very well. I’m becoming confident enough in the reaction that I can nitpick my delivery. Some choppiness, some meandering, but all-in-all a solid effort. I’d give it a B.
See for yourself. Here’s a 2:33 dimly lit clip of my silhouette equating my book to the cure for polio.
The only problem — and it was purely logistical — was I didn’t bring enough books. They’d purchased 50 books in advance for guests when they checked in. But they needed 7 more. I’d absentmindedly left extras in the office.
That meant I had to drive back to Latrobe (they’d put me up for the night), grab a stack of books, sign ‘em, and drive back down in the time for the swanky awards dinner.
It’s the kind of inefficiency that drives Val nuts.
When I phoned her of the necessity she immediately began brainstorming sensible solutions that would save me the trip. In my mind, I envisioned her in front of a giant wall map moving USA flag pins over Pointe du Hoc like Ike did in the hours before D-Day.
I said, no, I’ll endure.
In fact, I was thrilled. The development meant I’d get to enjoy a swell meal, free hootch and maybe make some exciting new connections.
But I left unsaid the biggest reason: I love being in big rooms where drunk people are going to say nice things about me.
That’s exactly what happened.
Understand, these are very convivial folks and I love them. Service people work long, difficult hours and if they’re not smiling sunshine about working on Christmas Eve some anal Ebert is going to post a social media rat slam saying the place is going to hell.
And, God bless ‘em, they love to party.
Me, too!
So we’re boozing at the reception and big grown men (my audience was about 75 percent male) are coming up to me and telling me I was great.
“I don’t think you know what a tough crowd you were facing,” one guy said. “We were all hungover and you made us laugh and feel better. I can’t wait to read your book.”
It got even better when they opened the doors to the dining hall.
It was like I walked into “Use All The Crayons!” heaven.
The stage was festooned with giant inflatable crayons. The folded napkins at each place setting were different primary colors and all the printed programs sustained the theme.
It was such a signature night for me I kept hoping I’d be invited on stage so I could thank meeting planner Heidi Howard, her friendly staff, and esteemed association president John Longstreet for all their warmth and encouragement.
I was also pleased to see the high regard my friend Joey DiSalvo, owner of Latrobe’s DiSalvo’s Station, is held by his peers. A past board chairman, he is beloved, as was evident in the raucous ovation he received at being introduced.
It couldn’t have all been because Longstreet announced Joey’d secured the gala wine donation.
It was just a splendid day. I feel so blessed.
It had me wondering how different I’d be today if I’d have heard this kind of praise 20 years ago, back when I was by God sure I deserved it.
So much heady praise could have warped me. I might have made a lot more money, but at what cost to my self-effacing personality?
Sure, I might have wound up living in a castle.
But it’s more likely I’d have wound up behaving like a word that sounds like the regal structure.
It’s probably all for the best.