Dialing up nostalgia for my old phone number 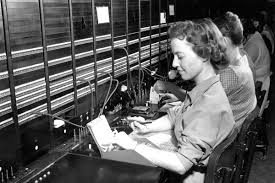 I hid in the basement and punched in the 10 numbers. I didn’t want my wife to know what I was doing. It felt like something illicit.
She might not understand.
My jealous smart phone might not either.
I wasn’t surreptitiously checking up on an old girlfriend. It felt more intimate.
I was dialing the phone number I grew up with.
I wanted to see who the number belonged to now, if they cared for it and if they ever wanted to know who’d had the number before it was theirs.
I wanted to know the number wasn’t being treated like it was just another number.
You never forget your first.
I have had a spousal relationship with my current phone number for about 10 years now. We’re committed. I have no interest in straying. I don’t check out other numbers when I think my number isn’t looking.
It’s the phone number I’ll have the rest of my life.
It used to be when we’d move we’d get a whole new number. I remember having about six or seven phone numbers before I was 25.
No more.
Our marriages might end, but our relations with our phone numbers never will.
To them we are wedded.
In fact, it’s likely the 10 digits some bored AT&T sales clerk at Westmoreland Mall issued my daughter about two years ago when she picked up her first cell phone will be hers the rest of her life.
They are an essential part of who she is.
I used to have committed to recall memory the phone numbers of two dozen close friends, about six or seven taverns and pizza joints, and all the top editors at National Enquirer HQ.
Today, the phone numbers of our most precious loved ones are plugged into speed dial and instantly forgotten.
I do not know the number of my own darling daughter.
If my phone dies and my wife’s not there, the only way I can hope to reach Josie is if I lean out the window and holler.
It never used to be that way.
When I was growing up the phone number of a friend with a cool car and a fake ID or a desirable girl were precious commodities.
I remember the sweet rush I’d get whenever a girl would hand me a slip of paper with those handwritten seven dashed numbers strung together.
We didn’t need area codes back then. If you weren’t 412, you might as well have been living on Pluto.
That little slip of paper was like a map to buried treasure. If she put a little smiley face on it it just about ensured I’d within the next week at least be getting a kiss.
But first I needed to find the time and the nerve to be alone with the phone.
That was no cinch. Remember, our phone-shaped phones used to be stationary. Privacy was a real crapshoot.
I couldn’t use the main dining room phone. Too public.
I needed to tuck myself away in my parents' bedroom and close the door.
Even that offered no sanctuary for outside the door I knew either my brother or Mom or Dad might be lurking, waiting to tease.
So I’d dial the number — it was rotary so back then the action was a true dial — and I’d lower my voice.
I remember being nervous and my breathing becoming irregular.
The combination of my hushed, urgent voice and panting breath made me sound nothing like the exuberant guy the girls had known from class. In fact, many of the prudish ones in those pre-Caller ID days assumed they were getting crank called by the local pervert.
They were mistaken.
Back then, I was a local pervert, but not the local pervert.
But there were times when I was free to talk and we’d talk for hours.
Growing up, those wonder year calls were special.
The news of family births and deaths were delivered through that number. I got the news of my first real job at that number.
It remained pivotal to my life 20 years after I no longer took calls there.
I’d call the folks and tell them how the grandkids were doing.
Those were the numbers I’d dial when I wanted to talk sports with Dad or chat with Mom about how lovely the leaves were that day or just how she was doing.
I still about once a year drive by the old house just to feel the rush of sweet nostalgia.
Why not see how the number was doing?
412 561-0410
It was ringing. It rang six times. Ten. A dozen.
No answer. No cheerful voice asking me to leave a message at the beep.
Nothing.
It seems like my old phone number is homeless, adrift.
I feel a strange urge to rescue it, to bring my old home number home.
It’s an odd emotion, I admit. Not many care the way I so clearly do.
I’d call it a hang up, but when it comes to old phone number nostalgia, hanging up is something I just can’t do.

Related …
I miss when phones were phone shaped
Use rice if phone drops in toilet
Kites, phones & a Bell
Smart phones/stupid people