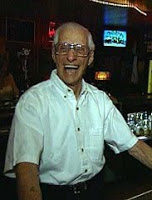 Yesterday was a great day. I spoke before 250 members of the Pennsylvania Librarians Association and it couldn’t have gone better. It was a true home run. I’ve never enjoyed a longer and more raucous ovation.
Honest, some were in tears and all laughed. They loved me and my message. It was a big payday, too, with speaker’s fee and more than $600 in book sales.
But that’s a topic for another day.
Today is a day for mourning.
If you think I’m talking about the Pirates loss, man, you’re missing the big picture.
Angelo Cammarata is dead.
He was 101.
He was, oh, so much more.
He was one of the two most memorable and beloved — and lovable — men I’ve ever known.
Both are in the Guinness Book of World Records for vastly different reasons.
And someday I’m going to see if I belong in the Guinness Book of World Records for being the reporter who’s friendly with most people who are in the Guinness Book of World Records.
I’ve always sought out the company of interesting people and tried to learn how they chose to live.
That’s how I became friends with Ange and John Clouse.
Having been to all but two of the world’s countries, islands and territories, Clouse was the world’s most traveled man. A decorated combat veteran of the Battle of the Bulge, Clouse swore if he ever got out of the Ardennes intact he was going live an entirely original life.
He did just that.
He was maybe the most swashbuckling storyteller I’ve ever known. Absolutely hilarious. He was married and divorced six times.
Cammarata was married to the same woman, the late Marietta, for more than 70 years and became world famous for rarely leaving the same building.
He is in the Guinness book for being the world’s longest serving bartender. He poured his first beer at his father’s old North Side tavern at midnight on April 7, 1933, the exact moment killjoy Prohibition in Pennsylvania was repealed.
I believe the Greatest Generation would have been worthy of being deemed the Greatest Generation if the only men in the Greatest Generation were Clouse and Cammarata.
It’s a pity Clouse never traveled to West View. These two men that seemed to have so little in common would have reveled in one another’s company.
I’ve never met two people with more genuine warmth and affection for their fellow man. It’s a joyful exuberance for the innate humanity that flickers within every human struggler.
Clouse discovered it by going all over the world. Cammarata by letting the world come to him.
I guess the best story I have about him is from 2006 when I was teaching narrative non-fiction at Point Park University and had Ange come in to be the final exam.
I was all about getting students to learn everything they could about a subject by asking incisive questions.
He was 97. I told him to simply answer their questions.
I introduced him by saying, “This is Angelo Cammarata. He is your final exam.”
The students went through about 15 minutes of increasingly frustrated questions — Where do you live? What do you do? — all the answers to which made this uncommon man seem increasingly common.
Then one exasperated student finally blurted out, “What makes you so special?”
That’s when he told them about being recognized by Guinness.
He told them about the friendships he’s enjoyed, the family to whom he was devoted, the importance of persistence, and why he felt sad for people who choose to be pessimists.
He talked about how he’d made it a part of his daily routine to drive a cherished old friend to and from the bar because he knew how much Cammarata’s camaraderie meant to the old man — and to him.
He talked about all the customers he’d served, the spirits he’d lifted, the marriages he’d saved, the suicides he’d prevented.
How, he was asked, did he find the words for these humble heroics?
“Didn’t need to. Most people who are having trouble don’t need advice. They just need someone who’ll listen.”
He did this all with a gentle manner and smile so warm and engaging he made Fred Rogers look like a sourpuss.
Later, me and the whole class went back with him to the bar where this famous gent poured us all beers.
It was funny, I’d spent 12 weeks trying to teach them how to succeed as writers, but in two breezy hours he taught them all they’d ever need to know about how to succeed as people.
One of the perfunctory questions I often ask subjects is about the best years of their lives. Many respond with “college,” or “When the kids were young,” or some other slim sampling of our portion.
Ange forever endeared himself to me when I asked him that question and he thoughtfully said, “I think they were the years from between when I was 35 and 80. Those were just really great years.”
Talk about seeing the big picture.
So pardon me if I’m not all weepy about my beloved Pirates getting bumped from the playoffs.
On this day, I don’t feel like any sort of loser.
I'm one of life's real winners.
I was friends with Angelo Cammarata.


The future of Edward Snowden