Beer madness: craft brew craze getting out of hand 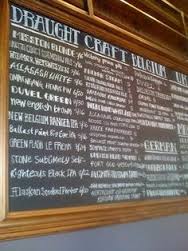 I hate to start the day with such a potentially divisive statement, but I’m convinced things are getting out of hand. People are behaving irrationally.
Trump’s sustained lead in GOP polls?
Worse.
I’m about to say bad things about beer.
Let that sink in for a sec.
It’s like Roger Goodell admitting every NFL telecast is 90 percent commercials, shots of people standing/sitting, slo-mo replays and just 10 percent shots of men actually playing football.
But we’re entering a beer crisis that is likely to drive thoughtful men to, uh, drink. Beer probably.
The problem is America, the land once renown for sucking suds, has begun producing too many suds that suck.
I fear we’re nearing a day when it’ll be impossible to enter a tavern and order any beers that taste like beer.
There are apple beers, spiced beers, pumpkin beers, blueberry beers and beers filled with other deceptive ingredients meant to mask the familiar beer taste that has sustained men like me since clear back to the 4th grade.
Ordering a beer in a place where I’m not a regular, something that has been reflexive for me, is becoming a challenge. The bartender wants to know if prefer stout or seasonal, artisanal or boutique, low, high or medium yeast content.
I order beer to forget life’s challenges, not add to them.
I’m a PBR kind of guy in a world that’s become awash in IPAs.
Worse, in some places conversation about beers is overwhelming conversation that used to be fueled by beer.
I’ve never been one of those guys who drinks beer to get drunk. I don’t thirst for beer.
I thirst for conversation.
Getting drunk is just a happy coincidence.
I enjoy sitting for hours in dark taverns talking sports, history, politics and which of the TV weather girls we most wish would do a remote from the bar parking lot.
Alcohol deftly facilitates loose conversation. It does so while simultaneously reducing the drinker’s ability to do anything else with any deftness.
But that all changes with craft beer drinkers who are more likely to talk about drinking craft beers.
It happened to me two weeks ago when I was on the way to the funeral of the late Angelo Cammarata. Some of you may recall (link below) he was the world’s longest serving bartender.
I was stuck in traffic, feeling melancholy, and thought I’d wait out the worst of rush hour in one of my favorite spots in Pittsburgh, the Penn Brewery. Its history dates back to 1848 and is evident in its motto: “More than a Brewery: A Piece of Beer History”
It makes real beer in the German tradition. But because it’s in business to make money, it also dabbles in trendy crafts.
This was driven home when two bar mates to my immediate right began talking in pretentious detail about their brews.
“This one has a nice fruity note,” one said.
“Mine has a distinct oakiness that reminds me of that nutty Belgian artisanal that won ribbons in Denver.”
They asked for samples and the bartender obliged.
I felt like I do when I take my daughters to a beach ice cream stand.
I point out what happened next not to disparage another cherished tradition I do not understand, but just to further enlighten on the craft beer drinkers’ priorities.
They began to talk about “Star Wars.”
They didn’t talk baseball, famous generals or which weather girl was most likely to give them a high pressure system inside their pants.
They talked Yoda.
I wish I could have bestowed them with some earthy wisdom.
Until we run out of Life Saver products, we don’t need fruity beers.
I guess it gets to me because it’s further evidence the beer world’s gone mad.
Iconic, internationally famous beers like Guinness Blonde, Red Stripe and Iron City are made right here in Latrobe, but Rolling Rock is not.
It’s made in Jersey (see second link).
Yet the makers, whomever the hell that may be, continue to perpetuate the fraud it’s made here in the old glass lined tanks.
Talk about your crafty deceptions.
For the record, my favorite beers are Duquesne brewed right here in Latrobe ( where else?) and Straub, brewed in nearby St. Mary's.
Both represent the finest in traditional Pennsylvania brewing.
And there’s nothing nutty about that.


The story of the suicidal Corona drinker
Posted by Chris Rodell at 10:27 AM