Elton vs. Billy Joel & writing way too much 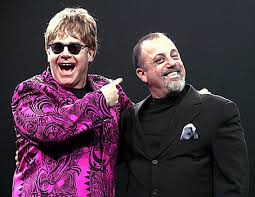 I don’t pay much attention to celebrity news about people I don’t consider to be celebrities. I’m talking about the Khardashians.
But I’m always intrigued anytime big rock stars get bitchy.
So I for years have followed the bitter back and forth between Billy Joel and Elton John, two artists I greatly admire for both their music and attitude.
Both have influential catalogues of enduring hits that resonate across the generations.
In fact, the only professional difference is Elton John is still reliably releasing new music every year or two and Billy Joel hasn’t released any new popular music since two years before most of the world had ever heard of Monica Lewinsky.
And he’s defiant about it. He says releasing new music would dilute his legacy.
Nonsense, I said. We hungered for what he had to say about the world condition he once so melodically skewered.
Elton was more blunt: “At the end of the day, he’s coasting . . . We've had so many canceled tours because of illnesses and various other things, alcoholism … He's going to hate me for this, but every time he's gone to rehab, they've been rehab lite. When I went to rehab, I had to clean the floors. He goes to rehab where they have TVs.”
Of course, given Elton’s flamboyance, us connoisseurs of hypocrisy found this delightful.
But I liked it whenever Elton berated Joel for not writing new songs.
I liked it right up until I heard Billy’s response.
“He’d say, ‘Well, why don’t you put out more albums?’ and I’d say, ‘Why don’t you put out fewer?’”
The more I thought about it, the more I thought, you know, Billy’s right.
Too many musicians are writing far too much.
Think of the money we’d save, the hours we wouldn’t waste and the disappointment we wouldn’t feel if our best artists maintained the integrity they had when they were hot.
Let’s first consider John and Joel.
My iTunes library has just 12 Billy Joel albums with 115 songs. The only official album of his I don’t have is “Cold Spring Harbor,” which was re-released after he hit it big.
I don’t have any greatest hits albums and the only live Billy Joel album is the essential, “Songs in the Attic,” which is fantastic.
But just 115 songs for such a monumental hit-maker? It’s very slim.
Still, they’re nearly all great. None of them has you diving for the FF button. His is a stellar legacy.
Then there’s Elton. Getting an accurate count is difficult because he’s released numerous compilations accrued from his 36 studio releases.
I have 286 songs from 20 albums and about half of them — only slightly more than Joel’s total — are crap. Sure, he had a five-year run of excellence, 1970-75, that rivals the Beatles, but since then it’s ranged from spotty to drivel.
There’s something compelling about all my 420 Rolling Stones songs, even many of the redundant  live versions. The contention upsets purists, but I believe “A Bigger Bang” from 2005 ranks among their best and that if you played it for an innocent unaware of the band’s history they would prefer it to iconic releases like “Exile on Main Street” and “Some Girls.”
It’s great.
You could argue Keith releases too few albums.
His new “Crosseyed Heart” is only his third solo effort. It’s very good.
He’s a delight right now, too, because he’s popping off about other rock legends he says don’t measure up. He’s recently slammed Led Zeppelin for being pedestrian and Keith Moon for being too flighty.
I’d like to hear what he says when someone asks, “So how does your new album compare with Bob Dylan’s new album of Frank Sinatra interpretations?”
Oh, Bob, how could you?
I tried to be nice when it came out, but “Shadows in the Night” is dreck. I hope it’s not his swan song — and I say that as a guy who’s never heard a single swan sing.
Dylan’s legacy would benefit if he’d have taken, say, every third album off and just gone and painted inscrutable self-portraits.
I have 467 of his songs. Billy Joel would probably say it’d be better if that number was closer to 300.
Same goes for Bruce Springsteen. I have 351 Boss songs and would be fine if he’d have taken the 1990s off.
Van Morrison rarely misses anymore, although he was scattergun prolific for vast stretches of his long career. I have 347 of his songs — and pity on you if you think his best song is “Brown Eyed Girl.” He just gets better and better.
So does Mark Knopfler, whose post-Dire Straits career — 112 solo songs — equals Joel’s in quality and output. I love Knopfler.
I’d like to ask Joel what he thinks about Tom Petty. In my opinion, no artist has had fewer misses than the head Heartbreaker. As great as he is, I still think he’s underrated.
So let’s validate Billy Joel’s point: People are writing too much. They shouldn’t write more stuff.
They should write less.
It would burnish their legacy and their fans would hold them in higher esteem.
Let me apply that lesson to myself right here.
I’ll no longer dilute my legacy by adding more unnecessary words to my already flabby blog canon.
I quit. I'm done. No more.
I mean just for today.
I’ll try and come up with some more shit tomorrow.
Because that’s just what I do.

Related . . .
Jersey Shore is back! Is Billy Joel too?

Dylan does Sinatra and why I’ll never re-marry

Petty wants me to buy vinyl & who’s better: him or Boss?

It is difficult to stay vital over a long career and musicians have their ups and downs. Back in the 1980s Van Morrison released classic albums on an annual basis and Dylan seemed a spent force. Two decades later and you have Love & Theft, Modern Times, and parts of The Tempest whereas Morrison could have stopped recording in 1991, and we would have lost very little.

I disagree on some of the Morrison post 1990's. I love Magic Time and Healing Game. But you're right on the money about Dylan. The resurgence that began with Love & Theft has been startling.

Thanks so much for reading and taking the time to comment.