Climbing over 200 dead bodies way up on Everest 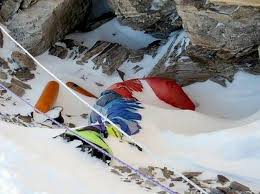 I want it on record that I’m the first to propose Mt. Everest is made handicapped accessible. See, I’d like to go to the top of the world, but I don’t want to bother with the suffering of having to actually climb the thing.
Or maybe it needs a 29,035-foot escalator or freight elevator.
Or maybe a really souped-up hearse.
Did you know there are more than 200 petrified bodies on the upper slopes of Everest?
It’d cost about $10,000 per corpse to retrieve the bodies, deemed too pricey for such an undertaking (and, yes, using the word “undertaking” to describe the act of removing dead bodies from what is essentially the jet stream just gave me a tingle).
Retrieval would endanger the lives of the body haulers and likely compound the problem.
I guess I can see the point.
If it’s something you can’t recycle or convert to circle-of-life garden compost, why bother?
What’s odd to me is the bodies remain frozen in the exact same position they were in the moment they drew their last frosted breaths. So some of them are seated, some have their arms raised in cell phone salutes.
The body of historic English mountaineer George Mallory, the man who replied “Because it’s there,” when asked why wanted to climb Everest, has been “there” since 1924. His mummified remains were found in 1999.
There’s a picture of one guy who laid down to a rest his head against a snow bank and gave up the ghost. The snows eventually shifted and now his body, still bent in place, looks like it could use a pillow, not to mention a big Snuggie.
Some of them even have cheerful nicknames and serve as morbid landmarks for those whose fingers are too mangled from frostbite to deftly work smartphone GPS apps.
The most famous is called “Green Boots,” named thus because he’s the one wearing green boots.
I know, I know. Calling a body wearing green boots “Green Boots” doesn’t exactly rock the clever meter, but you try thinking up a snappy nickname when you’re in what is known as the Dead Zone and your oxygen-deprived mind is losing brain cells by the millions.
But “make a right at Green Boots” is now part of Everest nomenclature.
As you may surmise, I am in the grips of Everest fever.
Not in the sense I want to climb it, of course. That’s madness.
But it’s a madness I enjoy vicariously talking about all day.
Val and I just saw and strongly recommend “Everest,” the gripping and lavishly filmed story of the catastrophic ’96 expedition that claimed the lives of eight ill-fated climbers.
It was compelling enough for me to rush home and pull from the shelf my copy of “Into Thin Air,” by Jon Krakauer, who was part of the expedition. It’s a terrific book about his experiences.
I think I so liked the movie and the book because it deals with intense human suffering that will never happen to me.
I’ll never understand the urge to get off the couch, tell the family, “See ya in four months — if I don’t fall off the mountain!” and trek off to Nepal where even if I achieve my selfish goals I’ll endure about six weeks of diarrhea, sleeplessness, dry heaves, hypoxia, frostbite and other extreme self-inflicted maladies.
That’s what you get when you climb Everest — even when you succeed at climbing Everest.
And it’s non-stop.
In one of our more confounding ironies, there isn't ever any rest on a mountain named Everest.
Yet, people seem impressed when someone says they’ve climbed it, something more than 4,000 Earthlings have done since Sir Edmund Hillary and Tensing Norgay did first did it in 1953.
Estimates are that 240 have died in the attempt.
The thing is I could probably in about a week construct the background material — website, photoshopped pictures, faked passport — that would lead people to believe I once summited.
I can be a very convincing liar, especially if my three human lie detectors (wife/daughters) aren’t there to refute with fact.
But I’d never dream of trying it in real life.
It sounds like absolute hell.
Plus, given my vanity, I know I’d be more concerned with leaving a fashionable legacy than proper Dead Zone wear.
“Make a right at Green Boots and head uphill. If you come to Tommy Bahama, it means you’ve made a wrong turn and you can kiss your butt goodbye.”

Related . . .
Time to lower Everest
Vegas: Sore from soaring in stunt planes
The story of the suicidal Corona drinker and BridgeWalk at New River
Enjoying a good long jump with Playboy Playmate Claire Sinclair
Lies about length and the manliest of men
Posted by Chris Rodell at 1:40 PM