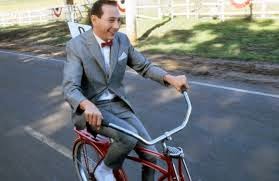 • When I heard there was a deadly brawl involving three Texas biker gangs I instinctively knew the man in the picture at least was safe.

• I’m happy David Letterman seems happy to be retiring. Last night’s adios Top Ten list was wonderful. I watched him when he was a morning show sensation way back in 1980. I’d never seen anything like it. And I was in college when he was revolutionary. We’d never miss it. He was as influential to our juvenile humor as “Mad” magazine had once been. The vintage clips he’d been playing the last month recall his brilliance. I think over the years Dave just got professionally fatigued at his inability to beat Jay in the ratings and it was like he stopped trying. I eventually became a solid Leno viewer for reasons that have nothing to do with perceived cool or fealty to the hip coastal critics. Jay made me laugh more.

• If those Letterman thoughts leave you thinking I’m a weenie, well, join the club. I was deemed “weenie” more times last night than the guy who drives the Oscar Meyer-mobile. Why? Last night, I skipped a big cigar smoker at DiSalvo’s Station in favor of staying in to watch the “Survivor” finale. I’ll bet I received 20 texts disparaging my taste, my intellect and my manhood. It was almost as bad as the time I ducked out on a drunken weekend in Athens, Ohio, to slink home to watch “The Muppet’s Most Wanted” movie with my family.

• I wonder if it bothers virtuoso banjo players that to most Americans the most accomplished banjo players in America are named Steve Martin and Kermit The Frog.

• I don’t know why I feel compelled to be honest with my buddies when I’m doing something I know will earn their disdain. None of them would have known if I’d have said I was skipping the monthly debauch to speak to the International Gay Bowlers Organization. At least I don’t think any of them would have known. Maybe some of them are secretly afraid to come out and publicly admit they bowl.

• In fact, the IGBO is meeting in Pittsburgh Nov. 10-16 and I have sent them a proposal about addressing their group. I recently shelled out $250 to partner with Visit Pittsburgh, the city’s tourism bureau, to take advantage of the marketing muscle behind all the conventions that come to this popular destination. I attended an introductory gathering Tuesday and was very pleased by the warmth of the informative greeting. The people are great, plus now I have access to calendars and contacts of every convention coming to town. It promises to be very beneficial.

• Still, I’m having trouble believing I’ll ever be successful as a public speaker until my mustache makes up its mind what color it wants to be. Many men my age have what is known as a salt ’n’ pepper mustache. I do, too. But their’s look good because the salt and pepper is all mixed up in one shaker. Mine is salt on one side, pepper on the other — two shakers on opposite ends of the table. I have to think it’s very distracting for anyone trying to suss out what I have to say in a public forum.

• I’m doing a random list today, in part, because I need to get ready for tonight when again I’ll be Word Master for the Greensburg Rotary’s Ninth Annual Spelling Bee at Greensburg Salem Middle School. It’s a role I assumed for last year’s bee, which nearly ended in controversy when a student incorrectly spelled the word “Pennsylvania.” How does a Pennsylvanian misspell Pennsylvania? He forgets to start with “capital P.” Luckily, the judges deemed the word’s inclusion too sneaky and gave the kid another chance. But having a role — even a non-judging one — in a spelling bee is nerve-wracking. If you can’t make it to the school tonight, I advise you to check out the excellent 2006 movie, “Akeelah and the Bee.” It is to spelling bee movies what “Rocky” is to boxing flicks. You’ll love it.

• So how was “Survivor?” It was outstanding. If everybody in America was as good as their jobs as host Jeff Probst is as his, the nation would be a juggernaut. Still, I like to reflect how the show is the exact same age as our oldest daughter, Josie, who will be 15 in September. The physical and cerebral changes in J-Ro are stunning. Yet, Jeff Probst hasn’t changed even a little bit. Neither have any of his lines.

• Wanna know what you’re playing for?

• Frontrunner for @8Days2Amish Tweet of the Month: “Too many people who mistakenly believe they have the world on a string realize too late what they’re actually holding is a lit fuse.”

• If I were less concerned about your time and how busy you are, I would include the following lines at the bottom of each and every post: Thank you. You taking the time to read and, I hope, enjoy my blog means the world me. I hope you’ll continue and refer it to friends whenever it’s worthy.

• I’ve had some people say I should do more of these round-ups because it would make blogging so much easier. But who said it ought to be easy? There’d be no point in blogging for free if you didn’t at least aspire to greatness every single time you sat down to type. Soothing mediocrity is our most addictive painkiller.

• Even if I never accrue a single speaking engagement through my Visit Pittsburgh partnership, I’ll guarantee you this: I’ll make back the $250 in free drinks and hors d’oeuvres in six months flat.

Cigar smoking Louts?!!!!! Why some of us might resemble that remark!

If the shoe fits, smoke it.