The Boss of the Bee: Me again as Word Master 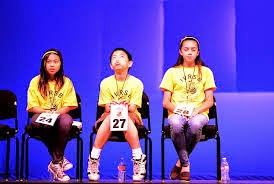 The nearest exit was blocked by three 8-year-old girls who at the moment were all bawling their eyes out.

Exit no. 2 was crowded with chairs, children and the folding table packed with all the gift baskets.

That meant the least obstructed way out was to leap straight off the stage and dash down the middle aisle of the Greensburg Salem Middle School auditorium and just pray I could dodge the 80 or so parents and supporters who would, I was certain, descend en masse and hold me until the cops showed up.

It was the 9th annual Greensburg Rotary Spelling Bee. I was again word master and the situation was on the verge of unraveling.

We were down to just two students — two darling girls — and neither could spell the two words in a row required to declare a victor.

The first girl would correctly spell mesa, but then flub xylophone. Then the next girl would nail pigeon, but stumble over hieroglyphics.

Unless you’ve been, you have no idea how nerve-wracking a competitive spelling bee among elementary children is. I’ve been to many less compelling NFL games.

The children are so precious. They’ve studied so hard. They are eager to do well.

And when they misspell aorta, it looks like theirs is going to rupture right there on stage.

This was the second year they’d asked me to be word master and it looks like the gig is mine until I show up drunk and for fun start asking the little 3rd graders to spell words like poopy or fart.

I learned last night my predecessor had been a prominent female broadcaster who fell out of favor when she gave into the temptation show off.

“It was unbelievable,” a judge told me. “When she told one kid to spell tsunami, she said, ‘The Japanese pronounce the word Ta-SU-ne-MAY.’ Geez, these kids don’t care about Japanese pronunciations.”

I told her that would never happen with me.

What did worry me was a crying kid could shatter my reserve and I’d be forced to act like a caring human being.

We know how that can lead to trouble.

See, as word master, I’m a perfect cypher. I dress nice and have a pleasant smile the whole time, but show zero emotion. I’m like “Hunger Games” emcee Caesar Flickerman only with a mood-tempering hangover.

Last year, it took me a while to achieve this facade. I remember having to force myself not to silently mouth the correct letters to the boys. Sure, I understand the necessity of being impartial, but I’ll do whatever I can to help a kid from the home team win.

I really started getting nervous when three of the girls started to bawl.

Any misstep or misspeak on my part it could lead to controversy.

But I have a precious 8-year-old girl at home. She cries, too. And when she does, my instinct is drop whatever I’m doing, pick her up in my Daddy arms and squeeze until my shirt’s soaked up all the tears.

Imagine the scandal if I did that with some other Daddy’s daughter?

Can you spell molester?

I’d be dismissed from future word master duties for reasons more felonious than a pretentious pronunciation of Ta-SU-ne-MAY.

Happily, we soon declared a winner. The runner-up failed on the word strategy and the eventual winner brought home the trophy by correctly spelling first encyclopedia then quadrilateral.

It was all very impressive.

Even more impressive, I made it though the whole night without a single mispronunciation or flub. Parents and organizers said my enunciations were flawless and I’ll be welcomed back next year.

I went home without having caused any parental dismay or scandal.

And that to me spells relief.

Word Master: I’m the boss of the bee