From '13: Missing the Mom that used to be 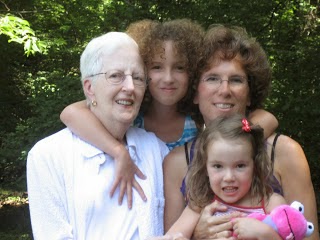 Wish I had something more cheerful, but Mother’s Day leaves me a little blue lately. I share this from ’13 because I know I’m not alone. Today we’re all either celebrating our Moms or in some way missing them.

(717 words)
The woman sounded alarmed. She called to tell me she thinks Mom, 80, is really slipping.

“She asked me to take her to the dentist the other day,” she said. “I told her to meet me in the lobby. When I got there she smiled and said, ‘Do I know you?’ She wasn’t joking.”

That Mom’s asking people I don’t know to ferry her to the dentist alarms me.

The woman’s one of Mom’s neighbors in the condo where she’s lived the past 12 years. My second cousin’s been living there with her the past two years, but the busy girl has a boyfriend and Mom doesn’t see her much.

I sensed the kind woman wants me to move Mom out of there into someplace where she could get more care.

Mom dreads the thought. She’s comfortable where she is.

Me, I’m like a third string quarterback with a fourth quarter lead. I’m just trying to run out the clock and not make any stupid mistakes to infuriate the fans.

I didn’t tell the woman that financial considerations are in play. We are in no position to add any level of elevated care for her.

I didn’t tell her caring for her has led to a profound estrangement from my absent older brother, someone I used to lean on for advice and support. We haven’t spoken for two years and any thaw seems unlikely. It’s something I should have seen coming, I guess.

Fifty years is a long time for a conservative to love anything.

I didn’t tell her I know I should feel more ashamed that I think it would solve a lot of problems if Mom just dropped dead of a massive heart attack.

I didn’t tell her any of those things. Instead, I just thanked her for her call and concern.

“Sure,” she said. “I really love Rachel. I just thought I should tell you about your mother.”

Tell me about my mother?

Let me tell you about my mother.

I always think of her whenever I see Carol Burnett.

It’s too bad they never met. They would have been great friends. They had the same preposterous sense of humor. It enriches the lives of all who know her.

I’ll never forget the day Mom did a sit-up.

I was probably about 15 or 16. It was the summer that she for some reason decided to take up the fitness kick.

She lay down on the floor and asked me to secure her feet. She put her arms behind her head and raised up to her knees.

Then on the reverse as she was trying to strengthen some muscles in her body, other key ones loosened. Her body became a bellows.

There, about a foot from my face, she blasted out the kind of fart that would have earned cheers in a fraternity house.

I don’t know how your mother would react, but here’s how mine did: she howled with laughter. It may not have resulted in the desired weight loss, but right there she laughed her ass off.

She grew up in Punxsutawney, Pennsylvania. Yes, she and Groundhog Phil spring from the same ground. But unlike Phil, she’s never seen a shadow.

She’s one of the most sunny people I’ve ever known.

A friend of mine told me it was his experience that a person with dementia becomes the opposite of what they were prior to onset. He said his once-darling mother became a mean old bitch before she died.

I don’t see that happening, and it will surely kill me if it does. If anything, she’s become even more childishly cheerful as her mental capacity is decreasing. Next to her, the late Fred Rogers was a cranky sourpuss.

Today’s not the day to write a eulogy for a woman who, if she lives as long as her 97-year-old father did, will endure until, gulp, 2030.

So today I will simply wish you and your loved ones a Happy Mother’s Day and share with you a lesson I learned at the feet of my dear, sweet mother:

Remember to try and always laugh your ass off even during the times when the situation really stinks.