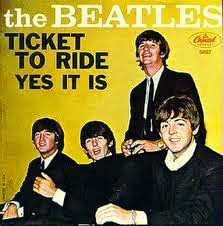 Today is my birthday! I’m 52. That means if years were degrees, I’d be 52 degrees warmer than the temperature outside. I’m glad this year’s birthday falls on a Sunday so I don’t feel obliged to blog about the mini-milestone. But it is a very happy day. My family makes me feel loved and I hear from so many friends, old and new. Makes me wish I could have a big party to thank everyone for their good wishes.

I almost re-ran the 2013 post from when I turned 50 (it is linked below), but I thought this from when I turned 49 was more appropriate. It’s about how the day I was born was the same day The Beatles were in the studio recording “Ticket to Ride.” I find that very cool.

Happy 50th Birthday to Me!