Cheney shot friend 9 years ago today; GOP shooting itself in foot ever since 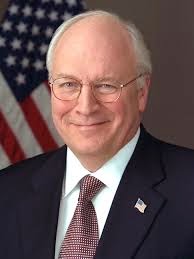 It was nine years ago today that Vice President Dick Cheney blasted his friend Harry Whittington in the face with a shotgun from 30 yards away.

Don’t believe it? Next time you’re in Austin, grab a really, really big magnet and spin around in a circle and you’ll likely meet Whittington, 87. The right side of Whittington’s face and body still contains about 200 pellets Cheney shot at a passing bird.

And here you thought insignia coffee mugs and sports shirts were the only tchotchke Veeps bestowed.

I remember hearing about the incident and being surprised to learn that Cheney was shooting birds. It just seemed so out of character that he’d shoot a bird.

Then I realized shooting birds was far easier than waterboarding them.

This is one of the few places you’ll see the shooting commemorated, which is a shame because I believe it’s an important date in American political history.

Because moments after Cheney shot Whittington in the face, the dominant far-right wing of the GOP began shooting itself in the foot by defending the indefensible, thus initiating a pattern that persists to this day.

It’s a mindset that contributed to them losing the ’08 and ’12 elections and makes me comfortable predicting that without some soul-searching they’re bound to lose in ’16, too.

The zealots deify Cheney. They always will.

It’s telling that the only person who’s apologized for anything that happened on the underreported events of that day is the victim.

Whittington said he was sorry he got between the bullets and the bird.

“My family and I are deeply sorry for everything Vice President Cheney and his family have had to deal with,” he said, adding he hopes Cheney will return to Texas for “the relaxation he deserves.”

But not a word of regret from Cheney, who didn’t accompany his friend to the hospital. The incident wasn’t even reported for two days, leading to speculation that Cheney may have been drunk. He’s never called Whittington to say he was sorry and he’s never publicly admitted he’d done anything wrong.

While Cheney had little to say the rest of the country did. There were waves of ridicule.

His Top 10 list that night was “Cheney Excuses,” and included the Brokeback Mountain reference, “he thought he was going to go gay cowboy on him.”

The ridicule only caused conservatives to rally around Cheney, to defend the indefensible.

In spite of every gun safety rule and simple common sense, they blamed the victim.

Cheney could do no wrong. Despite a thick catalogue of bone-headed mistakes, his wisdoms remain unchallenged. He’s still the most popular man in the whole GOP. It’s not even close.

If Cheney believes it, it must be so.

So the Iraq War wasn’t a fiasco. It’s a triumph.

It’s a mindset that led to birther movements, rabid climate change deniers, and the contention of a majority of right wingers that the notion of President Sarah Palin would be just peachy.

And, of course, if Barack Obama stands against Cheney and all he stands for then clearly Barack Obama isn’t just stupid. He is evil and must be destroyed.

Those very views are ratified ‘round the clock on Fox News. I’m fine with that.

The daily affirmation that the majority of Americans think exactly like every Fox viewer do only makes the day after big enchilada presidential elections that much more satisfying.

Of course, it’s just my opinion. You can take it or leave.

You can denounce me as a jackass, a cement-headed partisan, an Obama-loving numbskull.

If you see me on the street go ahead and shoot me the bird.

Anyone with any sense knows to shoot anything else just isn’t right.

Election ’12: Some tough talk for our Republican friends