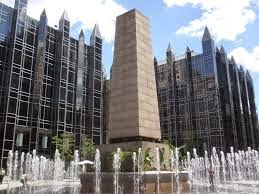 I was appalled to see a brash obscenity plastered on one of my favorite Pittsburgh landmarks. Even more appalling, I was the only one who seemed notice.

That way no Pittsburgh ice skaters will rush out to seek investment advice from MassMutual Financial Group.

Of course, they must be a pretty persuasive bunch.

How else do you explain caretakers at PPG Plaza allowing them to deface a work of art with four of their cheesy advertisements?

The base of the enigmatic obelisk that centers PPG’s popular ice skating rink in the heart of Pittsburgh’s Golden Triangle is now sided with MassMutual ads.

I’ll admit, it’s not exactly like dressing the Mona Lisa up in a Geico NASCAR jumpsuit, but it is unbelievably crass.

First, let’s consider the 31-year-old building, the most sparkling asset on Pittsburgh’s magnificent skyline. It is a 6-building complex covering three city blocks around the dominant 40-floor tower.

Architects covered the glass-maker’s HQ with more than one million square feet of PPG Solarban 550 clear reflective glass so they positively shimmer.

From Pittsburgh’s grand overlooks, the PPG Towers look like Oz’s Emerald City would if the Emerald City had been designed and constructed by Steeler fans.

Know what else I like about the building? No signs!

Yes, Pittsburgh skyscrapers have over the last 15 years been branded out the wazoo. PPG doesn’t need to stoop to such unseemly hucksterism. Its glass building says it all.

Now let’s consider the art. The obelisk was designed by building architects Philip Johnson and John Burgee. And while I love the building, the obelisk has always left me cold — and that was way before they surrounded it with ice.

It’s stark. It’s unimaginative. It looks like it was designed by two guys in a hurry to get the hell out of Pittsburgh before the rivers all froze.

When it was unveiled in 1984, meat ’n’ potato Pittsburghers looked at it and said, “Huh?”

Pittsburgh Post-Gazette columnist Peter Leo brilliantly declared it “The Tomb of the Unknown Bowler” and said the sparse plaza looked like a dandy place to host a public execution.

So as art goes, the obelisk doesn’t resonate. In fact, neither did the plaza.

That all changed in 2001 when PPG bestowed the square — and the art — with heart. It gave it over to Pittsburgh’s children.

It installed a delightful water park around the obelisk where golf-ball sized bursts shoot straight up as high as 20 feet. It’s utterly delightful. Me and my family have played there among the sprays dozens of times over the summers.

I’ve taken my lunch and a newspapers there just to relax and watch the children playing.

It makes me happy.

Around the same time, someone thought it would be a great idea to infuse the plaza with the same joyous atmosphere in winter. They built a small ice rink around the obelisk, which in the holiday season is dressed as a Christmas tree.

The plaza has become the go-to place for TV crews in town to snag some color about what it’s like to live in Pittsburgh.

The only thing I know about MassMutual is that the Mass is short for Massachusetts.

Know what that means? A Pittsburgh landmark is being defaced by New England Patriot fans!

If someone were caught spray-painting a message on the same space they’d go to jail — even if the message was something on which sensible jurors could all agree like, say, “Patriots Suck!”

But mingling art with advertising is just crass.

And it’s beneath PPG, a company that in 2013 was reported to have earned revenues of $15.1 billion.

If you’re going to be a tasteless sell out, you might as well go all the way and carve “VIAGRA!” up and down the sides of the towering erection.

That kind of advertising would at least justify my hard feelings.

This blog a Pittsburgh best-of . . . No kidding!