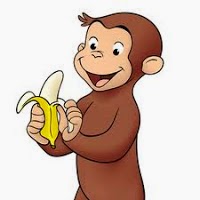 Have you had your morning banana yet? I try and eat one every day. This one from Feb. 2012 celebrates the fruit and all the great songs about monkeys — and as you’ll see many of our greatest bands/artists have recorded monkey songs.

I think we’ve all had enough monkey business for one day.
Posted by Chris Rodell at 7:38 AM