Best picture? It's "Gone With The Wind" 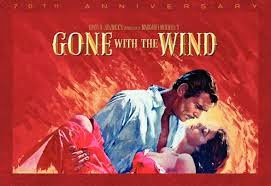 The movie industry will convene Sunday to announce the best movie of 2014. I can save them the trouble.

The best picture is “The Birdman.”

And I’ll go them one better.

The best picture ever is “Gone With The Wind.”

I made this determination Sunday after using my 52nd birthday as an excuse to make my family watch the 3:41 minute epic with me. It is the longest movie to ever win best picture.

It’s a triumph of filmmaking that a 76-year-old movie that stretches nearly four hours can hold the attention of two girls, ages 14 and 8.

“Gone With The Wind” is the greatest move ever made. It has it all.

Every time I watch it I wish my parents had named me Rhett. He’s film’s greatest rascal. He drinks, he gambles, he whores, he smokes, he’s impertinent.

Sure, I have good friends I can go to for all those recreations, but they’re five different friends. Rhett’s the whole package.

If my admiration for those dubious attributes is by some deemed scandalous, frankly, my dear, I don’t give a damn.

On the movie’s Dec. 15, 1939, world premier in Atlanta, then Governor Eurith D. Rivers declared the day a state holiday.

I can’t be troubled to look up the population of Georgia in 1939, but I have to assume the Atlanta host movie theater must have been massive.

It’s seems like an odd tribute from a Dixie governor of a confederate state. Maybe he was wrongly informed in the movie version the South wins.

It remains confounding to me that maybe the two best movies ever (“Gone With The Wind” and “Wizard of Oz”) were released within six months of one another way back in 1939.

It’s like the quality trajectory ever since has been in a tailspin.

What happened to greatness?

Remember, the films were released as storm clouds were gathering in Europe.

Leslie Howard, who played Ashley Wilkes, didn’t attend any of the premiers. His native England was being blitzed by the Nazis and he wanted to be home assisting with his countrymen, God bless him.

How did we go from “Wizard of Oz” and “Gone with the Wind” in six months clear down to Adam Sandler and Drew Barrymore starring in “Blended.”

Was Hollywood’s greatness another war casualty?

They’ve since made or are making five “Pirates of the Caribbean,” seven “Fast & Furious.” They even made “Grown Ups” and “Grown Ups 2.”

Author Margaret Mitchell resisted heartfelt pleas and lucrative offers to pen a sequel, saying she had no idea of what happened to Rhett and Scarlett.

In fact, after her death a sequel was authorized. The book was Alexander Ripley’s “Scarlett” and it led to a mostly forgotten 1994 miniseries starring Joanne Whalley and Timothy Dalton.

And in 2001 a woman named Alice Randall was at the center of a literary controversy for putting a unique spin on the famous story. She told “Gone With The Wind” from the perspective of one of Tara’s mulatto slaves.

My soul is impoverished by the neglect if the rest of the book contains even a kernel of the evident genius in that. That’s just flat-out hilarious.

So the greatest homage to America’s greatest movie was left to Carol Burnett. They’re rerunning those old shows of hers on ME Network and they are marvelous. We happened to see her take on Scarlett recently and it is still wonderful.

What’s odd is after so enjoying the movie on Sunday, I haven’t done squat all week either.

I don’t blame the ennui on the movie. It was just an odd week.

Maybe the weather’s to blame. The week’s been a washout with school delays and closings and I’ve somehow misplaced my mojo. I didn’t get a thing done.

Now, here it’s Friday and I feel like I wasted five once-promising days.

Gone with the below normal meteorological conditions.

Email ThisBlogThis!Share to TwitterShare to FacebookShare to Pinterest
Labels: Best movie ever, boys named Rhett, Gone With the Wind, Gone with the Wind fun facts, Gone With The Wind premier, movies 1939, why do so many movies suck