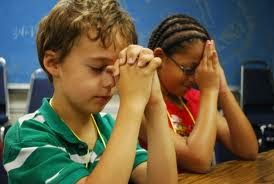 I write a lot about faith, divinity and things like how old we’ll be in heaven. I do so because I think that’s important and I consider it a duty to try and make the world a better place. That’s why in Jan. 2013 I wrote this piece suggesting the world would be a better place if we had snitch prayers. The idea is a vengeful God wouldn’t wait until the afterlife to punish jerks. I think everyone would behave better if He did.

Please stop by the blog tomorrow. Not sure what I’ll write about but I’ll try and make it something either cheerful or about the dastardly New England Patriots.

(659 words)
I was in the midst of conducting a jiffy little lunch grace with the 6-year-old when I decided to include a subtle morality lesson.

“And, please, God, forgive Lucy for drawing little devil horns, pointy tail and pitchfork on the missionaries on the cover of this week’s church bulletin at Sunday service when she should have been praying.”

Her thundered rebuttal was instantaneous.

Note the precise construction of her divine debunk.

She didn’t even address me. She responded as if God was right there at the lunch table ready to referee the dispute.

And, boy, would this blog post be different if He had.

I like that our little prayer sessions have her believing God is right there in the room with us and she can instantly narc on me for including a fib in my prayer, like the one I did about the drawings.

In fact, she’s right. I was the one who instigated the sacrilegious little doodle, one of the many little distractions I deploy to make attending church bearable for someone with a first grade attention span -- and I’ll let you decide whether I’m referring to myself or my first grade pew mate.

I’m resuming attending church again after taking about a year off for what I consider logistical reasons.

My wife is our Lutheran church organist. That means she’s required to be there nearly every Sunday for both the 8 o’clock and 10:30 services. Been that way for years.

Her obligation transforms what used to be the most peaceful time of the week into the most chaotic.

The girls fight. The drag their feet. They require me to do Mommy things like fix their hair, make them breakfast and cajole them into being on time.

It’s a real pain for someone who for decades held Sundays sacred for things like hangover recuperation and Three Stooges marathons.

And, yes, I’m acutely aware of the hypocrisy of letting minor nuisances like warming up Pop Tarts hinder me from going to worship a man who died on the cross for my sins, but that’s just how I feel.

If you believe what they say in church then God already knows that.

It is said He knows all, sees all.

Every time I hear that I wonder if He reads my blog. Somedays I hope not.

Most of my prayers involve thanking God for what I have and asking Him to help those who are sick, sad or lonely.

It wasn’t until my lunch conflict with Lucy that I considered the appropriateness of being a prayer snitch.

The concept is not without appeal, although it seems to run right up against Biblical stipulations about leaving all the judgements up to God -- and that must infuriate Justice Scalia.

To hell with the hereafter, I think we’d all like to see God take a more active role in punishing jerks in the here and now.

Maybe a groundswell of complaints about loutish behavior would lead to Almighty action.

It wouldn’t take much for people to notice and fly right. Sure, it would be great if He incinerated Syrian butcher Bashar Assad with a bolt of lightning, but it would have just as significant an impact if, say, Donald Trump woke up tomorrow bald.

There are just too many people hurting too many others with bad behavior that too often seems to go unpunished. Prayer snitching might help change that.

We’re just closing the books on the season where the sacred and secular compete for our attentions.

It would be an improvement if next year when someone says familiar lines about an omnipotent being who sees us when we’re sleeping and knows when we’re awake more of us would think of someone besides Santa.

People need to be good, for goodness sake.

And if that doesn’t work, they should be good because they’re afraid someone will rat them out with a snitch prayer.

When idiots pray
Posted by Chris Rodell at 9:44 AM