Roger Ebert movie "Life itself" more than a movie: it's about life itself 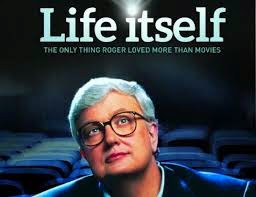 Last night I saw a movie about a critic. It didn’t make me wish I were a critic.

It made me wish I were Roger Ebert.

It made me wish I could live up to his example about how to live every moment of every life with cheer and vigor, even when life itself conspires to deny you those options.

“Life Itself” is, in fact, the film’s name. It’s airing on CNN and is based on the title of Ebert’s ’11 memoir. I don’t have enough up thumbs to recommend the movie the way it deserves.

For a movie about a kind and gentle man, parts of it look like a Freddy Kruger film.

Have you seen any pictures of what the beloved Chicago film critic looked like after 2002 thyroid and salivary gland cancer ravaged his face?

It’s horrific. I’ve never seen anything like it. It’s difficult to watch.

The treatments necessitated the removal of his entire lower jaw. What remains is a mouth flap and chin. You can see clear through his mouth to his bandaged neck. What’s left just hangs there and flaps.

But, man, he can still type.

He never stopped reviewing movies. It was like breathing to him. His last review was just days before his April 4, 2013, death at age 70.

But the cancer diagnosis caused him to accelerate his output. There were only so many movies he could review.

So he wrote about life.

The story is rooted in Ebert’s romance of Chicago newspapering, something that really resonates with me as I became a writer because I loved the writing of Ebert colleague Mike Royko.

The two were drinking buddies.

Heck, the movie makes it sound like Ebert was drinking buddies with all Chicago.

I find that endearing.

Seeing the old clips of “Siskel and Ebert: At the Movies,” review old B movies is in a way as confounding as it is joyful.

Why is that kind of lively intellectual chemistry so difficult to duplicate?

I’d watch clips of these two arguing about the precise color of the other’s tie. The footage show a feisty joy for articulation that has been absent from movie criticism — heck from most TV conversation — for 15 years.

That show with its humble PBS roots remains an absolute American treasure. No matter the movie, the criticism always crackled.

Must be something in all that popcorn.

What’s amazing about “Life Itself” is how the evident joy emanating from Ebert overwhelms his severe disfigurement.

In the end, you want to embrace that which repels.

Having said that it wouldn’t be fair to Ebert’s memory if I didn’t conclude by saying if you see only one movie this year, see “The Birdman” instead.

Starring Michael Keaton, it’s a pensive yet emphatic satire of the prickly egos involved in entertainment and it features Keaton’s best performance.

Sorry, Roger, I adore the movie about making your life about more than being a critic, but you were still a critic at heart.

Even if that beautiful heart was full to bursting with life itself.

My advice to tomorrow’s critics

How real men like Michael Keaton (and me!) shake hands