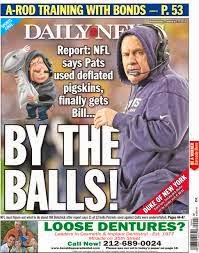 Enough topical stuff happening today that I thought it’d be okay to do a round-up. I don’t know why I always feel like apologizing for taking the easy way out for something I do for free. It’s like a guy who spends his days standing and staring at clouds wondering if they’d be more beautiful if he laid down in the grass (it is, by the way).

• DeflateGate has a lot of people thinking of Watergate, a minor crime that’s about to be undone by an clumsy cover-up. Me, I’m thinking of “Thinner,” the campy 1996 thriller based on a Stephen King book released under his Richard Bachmann pseudonym. In it a creep attorney kills an old gypsy woman while he was driving drunk and recklessly (fly down/pecker out/wife occupied). The culprit struggles with his weight and after he’s found not guilty in a sham trial, a gypsy brushes his cheek and says one word — “Thinner” — as he leaves. It unnerves him, but he sees no connections when he begins shedding pounds. The story really torques up when the pounds begin melting away, as many as 10 pounds a day. He eventually withers away to near nothing. See where this is going? Tom Brady wants small, soft balls? Thinner.

• News that the measles outbreak is being exacerbated by parents who refused to get their children vaccinated makes me wish Disney/McDonald’s/etc. were by law required to vaccinate children at front doors before being allowed entry and that the kids then be given civility lessons right there until five minutes after the needle sting stops.

• I thought President Obama’s SOTU speech was great, but it held for me one disappointment. I tuned in hoping he’d say, “And now that there are no more elections, I think it’s time I come clean. You got me. I WAS born in Kenya!” To which the GOP would roar with laughter and say, “We knew it!” And then Obama would say, “Okay, now that that’s settled, let’s see what we can together do for the American people.” And we’d all live happily ever after.

• My buddy, Lance McK., in Nashville noted he was impatient to hear what I thought about DeflateGate. Honest, unless the Steelers are in it, I try not to add to the hype of what to me is the most boring two weeks of the sports calendar. But for those of us who hate the Pats, DeflateGate is an absolute godsend. No matter what happens next, the damage to Bill Belichick and his team’s reputation is already done. They’ll never be in the conversation of the greatest franchises ever. That just leaves the Pittsburgh Steelers and a handful of pretenders.

• From what I’ve read about the country, the term “Yemenese lawmakers” is an oxymoron right up there with godfather.

• Early ’15 frontrunner for best comment about www.EightDaysToAmish.com comes from my friend Susan P. in New York. She posted on Facebook: “Dude, been meaning to write you about my ritual of reading your blog on my bus trips home from working in the city. I love clicking on the related links so I can read & reread posts. Yesterday tears were streaming from my eyes and I had to put my scarf in my mouth to muffle myself because I was laughing so hard. Was still laughing hours later. Thanks! Laughter is the best medicine and you are an awesome doctor.”

• One thing no one ever mentions about the Doomsday Clock: many of the best times I’ve had in my life have happened well past midnight. Not sure how that translates in this case, but I’ll never stop looking for the silver lining.

• Why Stephen King, as prolific a writer as there’s ever been, had to write books under a pseudonym makes me think less of him as a person and Maine as a state. Being Stephen King wasn’t good enough? He couldn’t find anything recreational to enjoy in Maine? Having said that, I’d be impressed if it were revealed that Stephen King was also writing under the pseudonym of John Grisham and that the guy we think is John Grisham was just some guy Stephen King hired to make the John Grisham deception seem more believable.

• If you’re one of those people that irrationally blamed Obama for gas prices when they were $4 a gallon, you’d better be irrationally giving him credit now that they’re close to half that.

• We saw “Foxcatcher” this week. Loved it. Very compelling with great performances by Steve Carrell, Mark Ruffalo and Channing Tatum, the hunky actor for whom my wife and many other females seemingly have the hots. I don’t see the appeal. As far as posing pretty boys go, Tanning is no Tom Brady.

• I’ve yet to hear any of the sports yapper programs intro a story about DeflateGate with the AC/DC song,  “Big Balls.” It’s bound to happen.

• I profusely thanked my friend Susan for her comment — and told her to say hi to her hubby, my old Ohio University buddy, Bryan! — but asserted she needs to begin reading my blog aloud. Do not muffle the laughter. She said that kind of sharing is frowned upon. So I told her to put on a puppet show.

• I’m confident enough about the future that I’m about to resume what was once a key component of my profile: travel writer. I’ve written travel features for Esquire, Sports Illustrated, Playboy, Cooking Light, Details and dozens of others. Even better, to me, were the offbeat stories I did for nearly every top newspaper in America. I tend to overlook that part of my background because it was so diffuse. But pulling them all together as I’m doing makes it look pretty impressive. So many adventures and fun stories. I think people are going to like it.

• “Do or Die!” is an inspirational phrase popular with many Type A individuals. I must be more of a Type U person. My options are usually do or don’t.

• As a fan of both, I’m not sure what to make of Bob Dylan’s release of an album of Frank Sinatra covers. It could be an interesting tribute or a disaster. What I’d really like is to see some skillful Sinatra-impersonator do 12 Dylan songs the way Frank would. Suggested set list: “Rainy Day Women #12 & 35,” “Leopard Skin PillBox Hat,” “Tombstone Blues,” “Subterranean Homesick Blues,” and “Hurricane.”

• I hope the Doomsday Clock doesn’t tick down to zero before at least April when I’ll have had time to purchase and enjoy Mark Knopler’s new album, “Tracker.”

• I’ve had some people say my blog  might be more successful if it were like this every day, just a raft full of observations. I disagree. I think it’s more satisfying for everyone — me included — when it involves more cohesion and is four complete stories four days a week. It’s more challenging, but so much more fun. I hope you agree.

• And just in case Susan’s bus gets stuck in traffic, here’s an extra batch of unrelated relateds. Thanks, my friends! Enjoy your weekends!

Norwegian TV up in smoke

What happened Sunday when I gave a strange woman a ride