8days2amish Tweets of the Month (yet again) 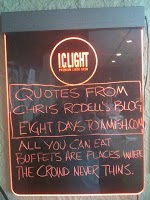 One of these days, I swear, I’m going to do a readership survey to find out how readers feel about these lazy ass monthly twitter round-ups, but before I go to that trouble I think I’d better do a survey to find out if people respond to surveys.

Oh, and you can follow my tweets at 8days2amish.

I’m thinking tomorrow I’ll write about either Obamacare or how May-December CBS Morning News co-anchors Charlie Rose and Norah O’Donnell can’t seem to keep their hands off one another.

• Don't why it's taken me this long to learn this, but the opposite of postpone is prepone. Really. OED says that's the word for being early.

• Joe the Plumber back in the news. He wouldn't have been near the sensation if he'd been Joe the Proctologist.

• Jessica Yellin out at CNN. Look for her to land at Fox where they're always eager to employ someone who can be described as yellin'.

• Asking a 7 yr old to convey with brutal honesty the flaws in her father's appearance is a mistake a grown man makes just once.

• So many people saying they're enjoying http://www.UseAllTheCrayons.com  on the toilet means I might change slogan to "Brightening Planet One Crap At a Time."

• I’ve cut my nose off so many times to spite my face it’s become physically impossible for me to stop and smell the roses.

• The were two genuine American heroes few honored by naming sons after them. Who? Orville and Wilbur. They were Wright, but it was wrong.

• It reveals an unpleasant cruelty about myself, but I enjoy looking at pictures of tranquilized bears falling out of trees.
Outlandish is a peculiar word. We already have a perfectly good word for what it means. It’s ocean.

• Not saying local volunteer fire fighters join for social aspects, but it is suspicious the town whore house catches fire every Friday.

• I try and be moderate in all things -- including moderation, a philosophy that allows me to engage in excessiveness whenever it suits me.

• The chances of finding suits in a suitcase are even less than those of anyone ever finding gloves in a glovebox.

• It's common knowledge you can hear the ocean thru a sea shell I just discovered you can also hear it through an empty toilet paper roll.

• Rejection and humiliation are challenges we can use to either defeat or fuel us. If that’s true, I have enough fuel to reach Pluto.

• I find it difficult to be grammatically proper on these dreary fall days. I fear I have Seasonal Effective Disorder.

• Editors who labor to remove the bull from carelessly written stories should be called decrapitators.

• I fear the CNN special "Blackfish" is going to give what are commonly known as killer whales a really bad name.

• Just discovered Crayola has a color called “Macaroni & Cheese.” Be warned it tastes nothing like the real thing and Listerine won’t help.

• Unless you're a disabled pirate or a sympathetic cyclops, you'll never have a chance to see truly eye-to-eye.

• Given the derivative nature of pop music, I'm surprised we've yet to see a band called The Lovin' Forkful.

March ’13 Tweets of the Month

I am now the bar’s official twitterist
Posted by Chris Rodell at 9:02 AM

Email ThisBlogThis!Share to TwitterShare to FacebookShare to Pinterest
Labels: 8days2amish tweets, are Charlie Rose and Norah O'Donnell in love, Chris Rodell tweets, how to write great tweets, my tweets stink