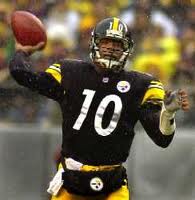 When I heard a famous Pittsburgh sports figure was announcing he was gay I thought, man, I hope it’s Joe Greene.

He’s maybe the most iconic Steeler ever. I like it when anyone reveals something surprising about themselves that causes us to take a fresh look at them and, by extension, ourselves and how we perceive others.

Mean Joe Greene being Gay Joe Greene would demolish so many stereotypes and I’d love that.

It’s been about a week since former Pirate owner Kevin McClatchy revealed to the New York Times he is gay, an announcement that makes him, I think, the first gay person ever associated with professional baseball.

Pro sports are maybe our greatest statistical anomaly. If, as some studies indicate, about 10 percent of the population is homosexual it’s incredible that no one gay has ever swung a bat or dashed onto a football field.

It’s logical to assume at least a few of our most manly of men are gay, but are shy about sharing the news with teammates and fans.

That might be because they perceive other athletes and many meat-headed fans are what is commonly referred to as homophobic, a term that always reminds me of actor Morgan Freeman who said, “I hate the word homophobia. It's not a phobia. You are not scared. You are an asshole.”

This is evident to anyone who’s ever attended a professional football game, as I’ve done maybe about 250 times over the past 40 years.

It can be vicious.

If you listened to disgruntled fans, you’d think everyone not performing well is either gay or really, really gay.

A soft defensive back who gets run over is queer. A quarterback who throws too many interceptions is a faggot. The refs? Whistles aren’t the only things they blow.

That means the gayest guy to ever play football in Pittsburgh is, by far, Kordell Stewart.

To me, his tenure from 1995-2002 represents the most disgraceful era in Steeler history.

Drafted second out of Colorado State, he electrified the NFL by playing a hybrid quarterback/jiffy back/wide receiver role that earned him the nickname Slash. One of the most gifted athletes to ever play the game, he could do it all.

And Kordell Stewart is black, the first black to play in Pittsburgh’s most high profile position in more than 20 years.

The 2001 AFC offensive player of the year, he twice led the team to the AFC Championship Game, but was blamed for both losses.

I contend coach Bill Cowher ruined Stewart by taking one of the game’s most innovative and intuitive players and trying to make him conform to Cowher’s stupid system, which was better suited to slow white losers like Kent Graham, Jim Miller and Mike Tomczak.

Of course, that’s speculation. What is fact is that Stewart became the victim of the most vile rumor mongering I’ve ever witnessed.

In Latrobe! I live in Latrobe and if there’s 6-foot-1, 215-pound black man sashaying around in a frilly dress I’m going to know about it.

It got so bad Stewart felt compelled to address his teammates and tell them, it’s okay, I’m straight. You can trust me.

I guess it’s important to narcissistic athletes who think they’re so gorgeous a gay teammate will put them moves on them when they’re soaping up in the shower with dozens of men big and hairy enough to attract gay bears.

Today, Stewart is an occasional ESPN analyst -- is there a former athlete who isn’t? -- and is a married father living in Atlanta.

I guess he must be on some kind of gay sabbatical.

I wish him nothing but the very best.

He’s approaching 50 and said he didn’t want to spend the rest of his life living a lie. He should be congratulated for putting even this tiny crack in a dam that one day is bound to burst.

I hope the next Tebow to electrify the sports world is flamboyantly gay, a twinkle-toed prancer capable of throwing rainbow touchdowns for gridiron glory.

I hope he’s Muslim, too.

For me, the best thing about McClatchy revealing he’s gay is that he’s in a committed relationship with a fella he met through Rick Santorum, a man I believe to be utterly homophobic in the Morgan Freeman sense of the word.