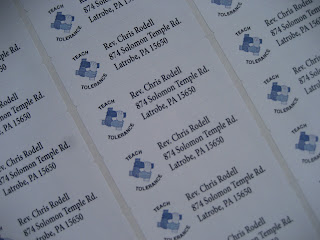 Another two powerful organizations have joined the Church of the United States Postal Service in recognizing me as The Reverend Rodell.

I love the postal service.

They don’t care what you call yourself as long as you pay the 45-cents it costs to stick a stamp on an envelope.

I began aggressively adding titles to my postal profile in about 2004 when I realized being Mr. Chris Rodell was getting me nowhere. That’s when many charitable organizations said they’d reward my meager donations with customized return address labels.

The forms offered a wide range of options.

So to Sierra Club I became Judge Rodell. Doctors Without Borders knew me as  “Esq.” And I felt surge of ecumenical pride when UNICEF took the bait and began referring to me in all its mailings as Rabbi Rodell.

But the one that seemed to work best was the Presbyterian honorific Reverend Rodell.

The godless Democratic Party minions, of course, particularly loved this one. I imagined them opening one of my Rev. Rodell donations and exalting: “Yes! Take that, Karl Rove! We’re narrowing the God gap! Let’s all celebrate by saying a prayer that Satan will swamp Virginia Beach with a plague of jellyfish and they’ll all float right into Pat Robertson’s pants!”

In fact, I have a picture of Barack Obama being sworn into office with the caption, “Thank you, Reverend Rodell, you have my deep gratitude for everything you’ve done to help the Democratic Party. Together we will change this country and change the world.”

I was so nearly speechless the first time I saw it I nearly forgot to say, “Bless you, my son.”

My very favorite return address labels came from a humble donation I’d made to the Southern Poverty Law Center, an organization I’ve long admired for their steadfast civil rights work. The labels included a multi-colored hands graphic encircled by the words, “TEACH TOLERANCE.”

These were the labels I wanted when I knew I’d be sending out hundreds of promotional copies of my book (want one? Just ask!).

So I tried contacting the group through its website saying I’d donate if they’d send me a few hundred of those same labels I’d run out of last year. Tried a few times.

Maybe they’re scaling back their mission in the belief that people have stopped hating other people for how they look or who they love.

That would be nice.

But I needed those exact labels. So I made a different kind of donation to my local print shop. They’re another organization that doesn’t give a hoot what I call myself as long as they don’t have to call me overdrawn.

And they look great!

If I’ve sent you one of my books you’ve seen them up there under my hand-scribbled note that reads “See Tip No. 225” with an arrow pointing to the “Rev.” “Use All The Crayons!” Tip no. 225 is a reiteration of this very trickery.

So now it appears I’m in the Barnes & Noble system as “Reverend Chris Rodell.” It was unintentional, but the implications could be huge.

I would think people will be more likely to buy my happy book if they think it was written by a reverend.

And -- good news -- as mentioned previously, it looks like Barnes & Noble is going to give them that opportunity.

I’d sent their small press department a copy of my book asking if America’s largest retail book seller would stock it in their 743 stores.

They wrote back almost immediately -- the letter is addressed to Reverend Chris Rodell -- that they like the book and were going to place an order!

This is very typical of my life. I get what seems like fantastic news in one line and then something that befuddles all the fun in the very next.

But it apparently is, indeed, good news. Those 10 copies were shipped to my local store last week as a test market. If they do well there -- and they will -- they’ll distribute the book to other area stores and onward and upward.

So given that mixed message the most clear benefit of being Rev. Rodell comes from the Parking Authority of the District of Columbia.

We were in Washington for secular reasons last November. I parked near the Tidal Basin and was careful to be sure I complied with all the posted signs. That’s why I was shocked to find a $100 ticket on my windshield after visiting monuments to the Founding Fathers.

Give me liberty or give me death, sure. But, geez, don’t give me a parking ticket.

I was driving a perfectly registered vehicle without the little registration sticker on the license plate.

Back home I checked and, yep, I was paid up and in compliance. The sticker must have gotten lost amidst all that junk mail to Rabbi Rodell, Judge Rodell, etc.

Rev. Rodell sent them a letter with proof of compliance and a note apologizing for how he’d inconvenienced the meter maid. Anyone reading between the lines would realize there was no way he was going to pay that ticket.

So I was stunned six weeks later to get a letter saying not only were they not waiving the fine, they’d doubled it!

Care to guess what happened next?

They sicced a collection agency on me!

Being a postal holy man, I know I should have said something along the lines of “Forgive them, Father. They know what they do.”

But by now I’m pissed. This Reverend was not about to turn the other cheek.

With each threatening letter, I’d send them maybe $25 or so and point out how unreasonable they were being.

When my total payment after six months reached $115, I sent them a truly righteous letter.

I said I’d already paid in excess of the original fine and the money the were seeking from me could be better used to help the truly less fortunate (me!). Please look into your heart, I asked this faceless bureaucrat, and find the charity I know is there and pay it homage. Your forgiving gesture can change the world.

It worked. It’s been five months now and I haven’t heard another peep.

So being the Rev. Rodell has saved me $85 in parking fines.

Email ThisBlogThis!Share to TwitterShare to FacebookShare to Pinterest
Labels: getting out of parking tickets, I love the USPS, lying about your titles, Rev. Rodell, Use All The Crayons