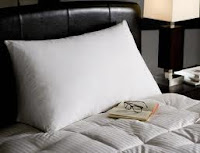 I didn’t read any stories yesterday that included the words “cleaner, sleeker, speedier,” because I sensed they weren’t about pillows.

My ancient pillow drives my wife crazy and she’s always urging me to go pillow shopping, a directive I resist.

I love my pillow -- we’ve been intimate at least 25 years -- and I wouldn’t dream of getting rid of it until I at least achieve some of the dreams I’ve had with my head upon it.

My wife’s says I should dump it.

You’d think of all people she’d be the first to encourage steadfast fidelity in the things with which I sleep.

You don’t see many ads for fancy new pillows. They come out maybe once or twice a year, or about the same frequency as new iPhones.

I know a lot of people lose a lot of sleep the night before a new iPhone is released. They parse each tweak and analyze microscopic screen size increases. They obsess over reduced gram-by-gram weight loss the way zipper-thin supermodels do before a tasteful nude shoot.

My iPhone 3G is two years old and remains the most amazing device I’ve ever encountered.

I purchased it in 2010, back when Osama bin Laden still roamed Abbottabad. I played with its features for two straight days in the hopes of discovering an app that would let me locate and incinerate the terrorist, a function that would have saved Pentagon generals lots of worry wrinkles and at least one of those fancy stealth helicopters.

I don’t know how many iPhones have come and gone since I purchased mine, but none of the new features has me feeling out-of-date, not enough that I notice strangers pointing and make fun of me.

Well, not because my phone’s obsolete, at least.

You have to hand it to Apple. They make minuscule adjustments to an already fantastic product, knowing their rabid fans will line up at the ballyhooed Sept. 21 release to shell out another $199 for what they essentially already own.

Here, I try to offer fresh genius about five days a week and am certain the whole structure would collapse the instant I dared announced I was charging readers a nickel to browse the posted mind manure.

I refuse to buy a new iPhone until they release one that will cure all the cancers I suspect they cause.

I remain mystified whey Apple doesn’t say, “Look, short of adding a gun function, we’ve taken this thing about as far as we can go, and if we make them any smaller there’s a danger you’ll risk losing them in your ear. You’re all going to have to just get along with the little marvels you already have.

“We’re moving on. Next we’re going to tackle an internal combustion engine that runs on all the discarded iPhones you’ve tossed when we goaded you into buying the new ones.”

I probably should get a new pillow.

I don’t sleep very well, but that’s not the inert pillow’s fault. Unlike the 6-year-old who climbs into our bed in the middle of the night, the pillow’s never kicked me in places no man wants to be kicked.

Any sound will wake me and set my restless mind to rambling. Once awake, I lay there on the pillow staring at the ceiling while my mind wrestles with the questions that torment me.

What is the meaning of life? Why is there so much senseless killing in God’s name? What the hell is wrong with the Pirates?

Will someone please ask Siri?

Email ThisBlogThis!Share to TwitterShare to FacebookShare to Pinterest
Labels: Apple engine, Apple sucks, the new iPhone, when to get rid of an old pillow