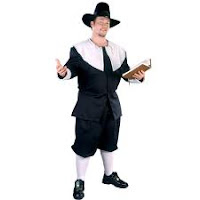 When I read Mayflower and got to that passage, I was reminded of an old joke about a guy confessing these kinds of sins to his pastor. When he admits to carnal relations with a chicken, the pastor says, "Brother, I don't believe I'da told that one."

Ha! Love it. So I'm correct, right? The story will never leave me. I hope there's nothing else in the book so corrupt.

brain barnacle fer sure
Do you think they killed the critters so they would not be seduced by their lusty looks?
Bryan zm557