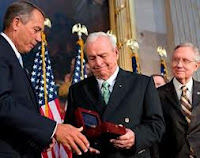 My slight regard for the beleaguered U.S. Congress enjoyed a boost yesterday when it made me the only crayon author whose book’s endorsed by a recipient of both the nation’s highest civilian honors.

He was in Latrobe Monday where he gave me noogies.

I’m struggling to grasp which of the two scenarios is more bewildering.

But having my book endorsed by one of the greatest Americans to ever live is a really close second. And, man, it’s just so darn cool.

The noogies, too, but we’ll get to that.

Palmer endorses Rolex, Cadillac and now me. I don’t know whether “Use All The Crayons!” will ever be Fortune 500, but evidence is mounting it will succeed.

The latest on that front is the great news that Barnes & Noble is picking it up for trial-run distribution. I sent a copy to the corporation’s small and independent press department in New York. My local store manager explained:

“They see so much poor quality work that when they see something with real promise they jump on it,” she said. “I’ve been referring hundreds of writers to the department and yours is the first one they’ve picked up and I’ve been doing this for five years. You should be ecstatic.”

I’m also humble enough to realize the quixotic appeal of a self-help book by a man who has trouble helping even himself only goes so far.

Having Arnold Palmer on the cover makes all the difference to the people who will decide whether my book gets lift-off. They couldn’t care less that my book might brighten the day of someone sad. They care only about stocking shelves with books that sell.

I tried to think of whom I’d have gotten to foreword the book if Palmer’d declined.

The logical choice is Dave, owner of The Pond. He’d say nice things about me, I’m sure, but they would be less geared to my writing and more to his experiences with me as a reliable customer: “Chris has only spilled three beers this year, isn’t our worst tipper, and we’re all charmed by the soft weeping sounds he makes when we shut him off.”

My wife posted a lovely thing about me on Facebook the other day urging friends to storm Barnes & Nobles to demand my book. “It’s warm, funny and loving -- just like Chris!”

It was perfect, ruined only when she added parenthetically, “(Chris wrote this for me and told me not to change a word),” which is the truth. I’m one of those husbands who dare not risk spousal honesty in public arenas.

Monday was Palmer’s 83rd birthday. We were among among the 200 guests there to fete him and his new Palmer-themed Marriott SpringHill Suites hotel. Palmer was happy the gala would raise tens of thousands of dollars to help life-saving cancer research.

I was happy the food and drinks were free.

It was toward the end of the affair at the table where Val and I were seated when I felt a strong arm reach around my neck while the other began knuckling my noggin.

I asked Val about it later. Did he look angry? Homicidal?

Did he look like he was waiting for someone to pass him a shiv?

So there we were, one of the most consequential men in the world treating one of the least like we were a couple of junior high school buddies. Billionaire Bill Marriott, also in attendance, must have been envious.

I contend we belittle Palmer when we refer to him as a legendary golfer. It’s like calling Nelson Mandela a successful parolee.

There’s just so much more to the profile.

The Wall Street Journal opined on Palmer’s 80th birthday, “Lasting popularity of Palmer’s magnitude simply cannot be explained.”
I now think it can and in one word: yes, it’s noogies.

He’s an incredibly wealthy and successful man so imbued with boyish enthusiasm, so without princely pretense, he thinks nothing of bestowing these warm gestures in the midst of a room others would stifle with self-important ceremony.

His is a warmth that resonates across humanity’s spectrum. We’re all the better for having the opportunity to bask in its glow.

I used to think it surreal this great man agreed to endorse “Use All The Crayons!”

It’s exactly what Arnold Palmer’s been urging for 83 years.

Color me happy for you and your noogied noggin.

Thanks, Keith, for your encouragement and support. I think it's working!