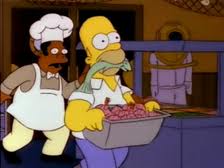 It’s eerie just how much a nearly 20-year old episode of “The Simpsons” parallels the gluttonous crusade of Bill Wisth, a Milwaukee-area man whose gargantuan grudge is only exceeded by his appetite.


Wisth was dining at Chuck’s Place restaurant where he took the “all-you-can-eat” fish sign written in chalk on slate with the same gravity Moses took the 10 Commandments.
The 6-foot-6, 350-pound Packer fan had eaten 12 fish filets when beleaguered waitress Elizabeth Roeming refused to serve him more. Management agreed to give him eight more fish if he’d vamoose, which he did.
Now as hungry for justice as he was for cod, Wisth summoned the police and two days later was back at Chuck’s Place walking the sidewalk with a picket sign -- and that’s the last evidence of healthy behavior you’re likely to read about the episode.
The reaction’s straight out of the Homer Simpson playbook. It’s the B-plot in the 1992 “New Kid on the Block” episode where Homer gets tossed from the “Frying Dutchman” seafood restaurant for the same reasons that infuriated Wisth.
He hires attorney Lionel Hutz of “I Can’t Believe It’s a Law Firm!” Hutz tells him it’s the most blatant case of false advertising since he sued the film, “The Never-Ending Story.”
The eventual trial hinges on key testimony of Marge Simpson who breaks down in tears on the witness stand after Hutz asks her what the Simpsons did when they were thrown out of the restaurant and unable to find another all-you-can-eat fish restaurant.
“We went fishing!” she wails.
An out-of-court settlement is reached and Homer is allowed to eat all he wants, as long as he does it for freak show promotional purposes in the restaurant window where he is billed as “Bottomless Pete, Nature’s Cruelest Mistake.”
One patron speculates Homer’s really a shaved ape.
It’s a pity that kind of Solomonic solution is likely to evade Wisth and Chuck’s Place, and I invite you to check out the restaurant website. Seems like a great neighborhood restaurant. It seems like the kind of place unlikely to try and poison a customer, although I’m sure that’s been considered.
Wisth doesn’t have a website, as far as I can tell.
I wish I had a way to glean more information about the man. What I know is uniformly unflattering: he’s gluttonous, belligerent over petty issues, rude to waitresses. Roeming told local reporters that the restaurant has tried in vain to accommodate his demands and even gave him a tab which he never paid.
It’s a cinch he’s a cheap tipper, that in itself a hell-worthy sin in my book -- and Hell’s going to be mighty crowded if I ever get to decide who dwells there.
That we live in a society where such wanton rapaciousness is encouraged is another matter, but who among us can dispute the tyrannical wisdom of his position?
“All you can eat” is a gastronomic statement without concluding punctuation. It applies to both the svelte and spacious. Clearly, Wisth is a man determined to eat the ocean empty of fish and then maybe floss with squid tentacles.
Really, the Homer solution makes perfect sense. The restaurant could seize on Wisth’s gluttony and build a “Man vs. Restaurant” reality show around its thinly -- and I’ll bet you didn’t think you’d read the word “thin” in this story -- veiled attempts to culinarily kill their nemesis.
They could set him up in a custom-made and reinforced booth and dare him up to eat multiple servings of high-caloric meals zoo vets forbid animals like rhinos from consuming.
I’d watch.
Sure, some people will be fearful about the effects such tastelessness will have on our culture. Others will fear the legalities. And restauranteurs will fear the precedent of standing so boldly behind the all-you-can-eat ethos.
Me, man, I guess I’m just fearing for all the fish.
Posted by Chris Rodell at 11:24 AM