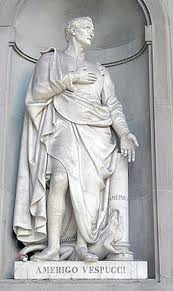 So I was watching a news show where Savannah Guthrie was slated to talk to Dakota Fanning and wondering why some cities and states rate baby names and others do not.
I love Pittsburgh, Pennsylvania, but I’ve never heard of man named Pittsburgh Smith or a woman named Pennsylvania Barnes. But I’ve heckled retired baseball manager Dallas Green, read Virginia Woolf, and maintain one of the great names in movie history is Indiana Jones (character’s real name: Henry Walton Jones Jr.)
Would the hero have enjoyed nearly half the dash if he’d been nicknamed after either of the Hoosier State’s immediate neighbors? Ohio Jones? Illinois Jones?
Not a chance.
The United States of America were named in honor of explorer Amerigo Vespucci (1454-1512), the Italian mapmaker/explorer who proved that the New World wasn’t Asia, but a previously unknown fourth continent.
It’s an historic legacy, and I wonder how differently our patriotic iconography would be if Mr. and Mrs. Vespucci had named their boy Burt.
Think about it. We’d be the United States of Burt.
U.S.B.! U.S.B.! U.S.B.!
Doesn’t quite have same ring to it, does it? Plus, for the past 15 years or so international audiences would have been confused over whether we were cheering our native Olympians or useful computer ports.
And I’ve never met anyone named America. That’s surprising. You’d think the uber-patriots would name all their children America, a sure way to secure them internships at places like Fox News.
I think people shouldn’t name children after cities and states unless they were conceived there. Or maybe, like the old days, the birth city should just be included in the name like Jesus of Nazareth or Paris of Hilton.
Jordan’s a very popular name for both baby boys and girls, but I’ll bet no one ever associates the name with Middle Eastern connotations. You’ll likely get a big blank stare if you ask any old Jordan if the name gives he or she any ancestral pull with the ancient Hashemite Kingdom.
New York is one of my favorite cities, but naming a child New York would be a real clunker. Not so with some of the boroughs. There’s supermodel Brooklyn Decker, and Ashley Simpson and ex-husband Pete Wentz named their son Bronx Mowgli Wentz.
It’s unlikely NFL Hall of Fame quarterback Troy Aikman was named after the once-factual and now legendary city of Troy in Turkey, site of the Trojan War, or that “Baywatch” babe Alexandra Paul’s ever been to Alexandria, Egypt.
I’d thought a basketball superstar’s father must have served in the military and had fond memories of Kobe, Japan, to name his offspring Kobe. Wrong! Turns out Joe and Pamela Bryant were inspired to name their son Kobe after seeing the marbled beef delicacy on a restaurant menu.
So I guess it’s perfectly okay for a boy named after steak to occasionally act like a hot dog.
Chris isn’t the easiest unisex name in the world to lug around, but I wear it with pride because I know how much it meant to my parents when they yelled it and I came running.
That’s the way it is with parents. The kid doesn’t become the name.
The name becomes the kid.
Still, I’d advise parents against naming their daughters Dakota or Savannah. I just know puckish doctors would be forever joking about whether perceived ailments were in North Dakota or South Dakota.
And Savannah’s a great city, but I’d be weary about naming a girl Savannah for fear that one day an insensitive physician might joke that Savannah’s congestion might stem from too much traffic downtown.
Rap culture has given us an interesting example of how one state name can be morphed into an interesting handle. That would be Flo Rida, a nifty homage to the Sunshine State where singer Tramar Dillard was raised.
Of course, that clever kind of deconstruction wouldn’t work at all with some states.
For instance, woe be unto the father who risks the future virtue of his daughter by naming her, say, Idaho.
Posted by Chris Rodell at 8:16 AM