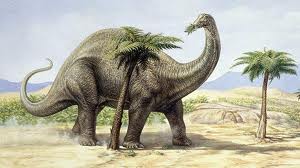 Did anyone else notice frightening parallels between the two seemingly unrelated headlines I spied this morning on the Google News round-up?

First up from BBC Nature: “Dinosaur gases ‘warmed the earth.’”
Then this from the L.A. Times: “42 percent of American adults will be obese by 2030.” Writer Melissa Healy uses the playful verb that the ranks of obese are bound to “swell.”
Very clever.
The obvious connection is that some future species will one day report that noxious gas from sauropod-sized humans rendered the planet wholly uninhabitable to all but fraternity house refugees used to dwelling in hot, smelly environs.
Researchers estimated that the dinosaurs produced 520 million metric tons of methane gas annually. As part of my vow to be less politically antagonistic, I’ll refrain here from making a cheap Rush Limbaugh comparison.
It’s a truly stunning figure considering that dinosaurs were a species who were physically and intellectually incapable of playing the old pull-my-finger stunt my father taught me when I was a boy.
Questions bloom rose-like when you consider scholarly men and women are today paid to speculate about the metric tonnage of long-spent dinosaur farts and how the gases ravaged the globe.
As boys, did the men once dream of growing up to be storm chasers before opting to pursue more Jurassic sorts of winds? Does dinosaur gas research lead the women to be extra careful in choosing perfume for that all-important first date?
Of course, we’ve known for years that cow flatulence is wreaking havoc on our ozone layer.
Or is it reeking havoc?
Maybe it’s that scientists are too polite to bridge the subject, but I’ve never seen a study that says how much human-produced methane is harming the environment. It’s got to be substantial.
I know guys who are so fluent in flatulence you’d think they were conversing in a secret language.
That brings us to the second study, the swell one that says that 42 percent of Americans will be obese by 2030.
I read that twice to make sure it didn’t say “by 2:30,” which seems as likely.
I golfed this weekend with three stout gents who were concerned about burgeoning weight.
They talked about the diets with which they were engaged, their exercise regimen and the importance of portion control.
Like most middle-aged people, I share their concerns. That’s why I was flattered when one of them turned to me and said, “I guess you never have to worry about your weight, do you?”
It was such a kind observation, I felt immediate shame when I blurted out, “Not as long as I’m standing next to three lard asses like you.”
The remark led to an unexpected burst of physical fitness as the tubby trio chased me with their clubs intent on killing me for 14 feet until they got too winded to pursue.
I spend a lot of time wondering about the long-term impact mankind has upon the planet.
It’s a pet theory of mine that if our march toward mass obesity continues our aggregate weight will soon be so great the exhausted earth’s rotation will slow to a crawl and each day will last 28 hours. I’m hopeful with those four extra hours our scientists will have more time to devote to solving all our most pressing environmental problems.
Me, I’d probably devote the extra hours to watching eight more daily “Seinfeld” episodes I’ve already seen on average 197 times each.
Still, given the cataclysmic consequences, it probably makes more sense for us to watch what we eat, exercise and ignore the cow when she asks us to pull her finger.
Count me as among those who believe our jewel-like earth is a fragile and should be preserved. We need to keep it as pristine and odor-free as possible.
We don’t want to be the generation responsible for putting the stink in extinction.