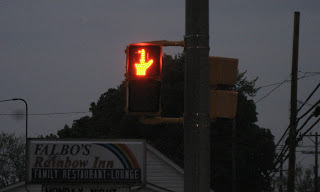 Those of us who raise our children in small towns feel superior to the uncouth louts raising theirs in big, rude cities.
This is particularly acute with me because we live in Mister Rogers’ Neighborhood.
It’s true. My mailing address is Latrobe, Pennsylvania, but in fact we live in tiny Youngstown, pop. 981, birthplace of both Arnold Palmer and Fred Rogers, two international icons renown for sportsmanship, kindness and proper manners.
I understand it’s unbecoming of the legends, but the association makes me feel snobby.
But along with that social cache comes responsibility. We residents need to live up to these stellar examples. Thus our sons and daughters will be polite, mannerly and kind to strangers -- at least until they’re 16 and start driving in traffic when all bets are off.
That’s why this was such a disturbing weekend. Our youngest -- she’ll be 6 in June -- expressed a cheerful eagerness to give the finger to a neighbor with whom my wife had a nasty public parking dispute.
It happened four doors from the town stop light where someone subversive has altered the pedestrian crossing sign so “don’t walk” appears to be permanently giving everyone the finger.
Yes, birds are flying all over Youngstown.
All this takes place days after I coined a new parenting guideline that came to me when my wound-up daughters were hoochie-cootchie dancing around the living room.
“Girls! Girls!” I beseeched. “How about a little more class and a little less ass!”
As child-raising homilies go, “More class, less ass” isn’t exactly the kind you’d hear Mr. Rogers share, but it rhymes so I find it irresistible.
The parking incident took place on Thursday at the school bus stop. My wife parked along Main Street in a perfectly legal manner. No paint. No signs. No meters.
The girls got off the bus and dashed into our arms. It was a scene of wholesomeness worthy of “The Waltons.” That’s why it was so jarring when the elderly lady came out on her porch and began screaming at Val.
“You can’t park there! You think you can park anywhere you want? I oughta call the cops!”
The girls were alive with interest. They’d never seen anyone shout at Mommy before.
Val responded admirably by pointing out we were only there five minutes and there was no need to be so mean.
I remained quietly alert. I noted the woman’s roof had a satellite dish, which meant she had access to cable news programs. I sensed by her irrational hostility to gentle things like Val she was a Fox News viewer.
That meant she was well-versed in the “Stand Your Ground” laws and would have felt well within her rights to gun Val down in front of her family two days before Mother’s Day.
I began searching the driveway for heavy rocks to chuck in case she drew her Glock.
Val wisely de-escalated, said she was sorry for ruining her day, and we left.
As this is a small town, Val realized on Sunday from her prominent seat at the church organist bench that the crazy woman is a fellow Lutheran who sits about 15 pews from the pulpit.
What we small towners gain in quaint, we sacrifice in anonymity.
The incident occurred during an interesting time in the lives of our daughters.
The 11 year old, the one who’d never dream of helping her little sister learn things like basic arithmetic, is an avid educator when it comes to teaching swear words and gestures she’s learned during 5th grade recess.
Just last week she taught her how to flip the bird and told her do so whenever anyone makes her angry. I expect I’ll see it tonight when I tell her having a third Oreo might diminish her appetite.
What’s odd is how something that comes so naturally to any adult with a driver’s license is actually a motor skill that requires childish practice.
She intently holds her little right hand up and with her left hand gently pushes the middle finger out. If you saw it from a distance, you might think she’s cradling, not flipping, a different kind of baby bird.
I don’t know who’s strategically applying electrical tape to the cross walk sign, but it’s becoming a local tourist attraction. People gather on the side walk to point and laugh.
You could argue it’s not very classy, but I prefer to think of it as a harbinger of cultural migration.
The big city birds have winged their way clear to Mister Rogers’ Neighborhood.

Thank you, my finger-flippin' wife!