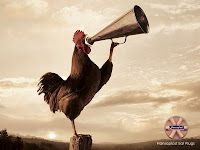 I just woke up from a really great night's sleep. Hope you had one, too. But I thought I'd re-post this June 2009 piece about back when I didn't. The rooster's gone. I don't know what happened to it and I swear I didn't kill it. I wish I slept great every night, but I know I wouldn't appreciate it as much if I did as I do.


I don't miss that rooster even one little bit.


I haven’t enjoyed a really good night’s sleep since I first became ambitious about girls and having reckless fun far from the confines of the crib.

I don’t feel too bad about it. The woods, at least where I live, are full of those.
Posted by Chris Rodell at 9:42 AM