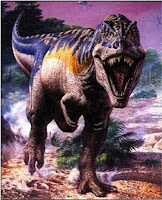 No foolin', I just love April 1st. I've already pranked the girls twice, once bringing the youngest to near tears. I told her Mommy, who's been visiting her sister for three days, was staying an extra month. She's only 5 and doesn't understand the spirit of April Fool's Day. Now, after her baptism into the day's cruelties she gets it with a vengeance. She's been a carnival of evil pranks and I couldn't be happier. So I thought this 2008 post about telling strategic lies to the girls would be a good one for Re-run Sunday.
It began to dawn on my daughter sometime earlier this year that I haven’t been getting into telephonic shouting matches with President George W. Bush every month or so.

And that’s the truth.
Posted by Chris Rodell at 9:45 AM