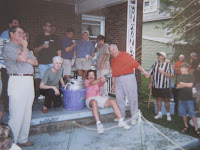 I’ve been reluctant to share this brainstorm for fear of appearing treasonous, but I think I’ve divined a way to deliver rocket-like technology with North Korea that will earn us their beleaguered citizenry’s everlasting goodwill.

Slingshots used to be boyhood staples. Youths would take them to school and use them on the way home to plunk trash cans, tree trunks, slow-witted squirrels and each other.

Times change. Minor injuries led schools to ban slingshots as dangerous. Kids can no longer take them to school.

Today, they take Glocks instead.

I never took a slingshot to school -- more for reasons of chronic truancy than devotion to non-violence.

But there are about 200 people who when they hear my name zing straight to one word: Slingshot.

Not just any slingshot, mind you. A towering 40-foot behemoth capable of flinging spray-painted potatoes more than 500 feet.

It was the summer of 2000. Our old house, the one with the big apple tree out back, was located on the slopes of a lush field at the base of a sturdy mountain that belched big gusts of wind when the storms developed. It was like living in a wind tunnel. I’d be out there at least once a year amputating damaged limbs.

It was always what I’d call a five-beer job.

I’d open a beer and study the problem, work for about 20 minutes, open another beer and resume studying, repeat.

During the fourth beer break, I vividly recall having a “Eureka!” moment.

“You know,” I said, “if I cut that upper left branch just so, I could turn this sturdy old apple tree into a dandy slingshot.”

“What a great idea! I think you’re really onto something, handsome!”

Takes me about four beers to overcome my shyness about talking out loud to myself.

The hardware required four eye-hole screws and about 80-feet of strong, flexible surgical tubing. I spent hours duct-taping and massaging a thin square of cardboard until it was supple enough to use as a delivery pouch.

It was the summer of 2000. Val was eight months pregnant. It was our last child-free party and our best. It may have been the best party ever that didn’t involve at least a little nudity.

The crudely-drawn invitations depicted a giant “Y” towering above the Pittsburgh skyline. Extended pull lines stretching clear to Ohio crowded the left side of the page. In the middle was the Atlantic Ocean. The far right had a bullseye straddling the once disputed border region between France and Germany.

The copy urged everyone to bring baskets of objects that weighed less than 12 pounds. Suggestions included over-ripe fruit, discarded children’s toys and the cranky neighbor’s cat. One guy brought a basket of goo-filled surgical gloves.

We spent an afternoon spray painting 200 potatoes various colors for gambling purposes. Less inebriated judges would stand in the field and gauge whose potato flew farthest.

It is a true thing of wonder to see volleys of silent potatoes soaring through the dusky sky with barn-penetrating velocity. I think it’s something even sober people would appreciate.

I remember lying on my back in the grass and watching those inanimate objects sailing over my head and saying, “I’ve really done something noble for mankind here. This is something we’ll all fondly remember forever.”

“You got that right!” I replied (the day’s beer consumption had long rendered my self-talking shyness moot).

Well, today, I’m going to do it one better.

I propose we suggest the powers of the giant slingshot to Pyongyang. Let’s help them build one capable of launching what they said was a satellite needed to aid crop production.

Really, I think it’s something NASA should consider, too. Slingshots are eco-friendly and I have to believe rocket fuel’s pricier than even unleaded.

We do this on the condition that they allow us to monitor all slingshot activity and that they accept Western aid to feed their starving people.

If the tyrannical regime refuses our assistance, the international community will justifiably come down hard.

But what can we as individuals do to ease the suffering of the North Korean people?

How can we bypass traditional trade methods and flood the needy people in the North Korean countryside with life-saving food stuffs?